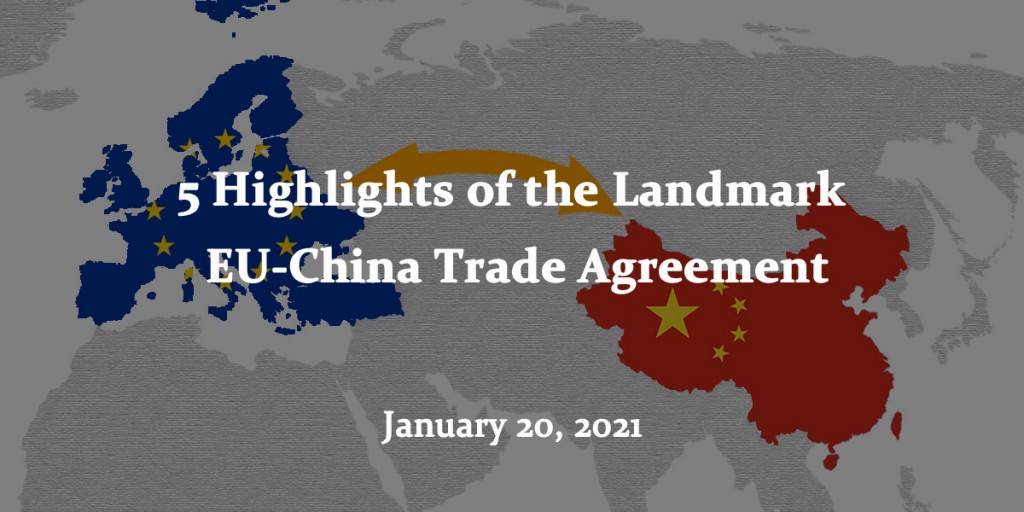 On December 30th, 2020, the European Union and the People’s Republic of China announced the approval in principle of the Comprehensive Agreement on Investments (CAI) after a conference attended by the leadership of both parties, including Chinese President Xi Jinping, German Chancellor Angela Merkel, European Council President Charles Michel. In a statement released by the European Council and European Commission, the agreement is described as granting an unprecedented level of market access [to China] for EU investors, giving European businesses certainty and predictability for their operations. Chinese companies will also enjoy further market access in the European Union. Considering China’s booming luxury products market, as well as the long-term development of its overall consumer economy, 2021 stands to be an exciting year for business in Europe and China.

Although the agreement has yet to be formally signed and implemented, it is expected to take effect in the near future, possibly during the first quarter of 2021. We recommend that businesses and enterprises with operations or interests in China or Europe take note of the following five highlights of the deal:

The Comprehensive Agreement on Investments uniformly grants EU states access to the world’s most lucrative market. While 26 out of the 27 European Union member states have pre-existing bilateral trade agreements with the People’s Republic of China, these cover investment protections without guaranteeing market access. The CAI ensures that businesses domiciled in the EU will be able to do business across China without any unexpected restrictions. While the CAI was originally intended to grant Investment Protections along with market access, this is currently not the case and European businesses should refer to their country’s bilateral trade agreements with China to be informed of their Investment Protections.

The agreement removes quantitative restrictions, requirements to form joint ventures with Chinese partners and equity caps (limitations on ownership stakes) in various different sectors. This ensures fair and free market access without the potential for red tape or subsequent policy adjustments by local authorities to hinder market access in practice.

The automotive sector, including new energy vehicles, is now open to European companies without the need to form a joint venture with a PRC company. European companies can also operate wholly owned ventures in the healthcare sector, including hospitals. Restrictions will also be dropped in the I.T sector, transportation, (air and sea) Financial Services and Research & Development of bio-resources. All these sectors create additional opportunities for European consultants and manufacturers.

In addition to further market access, European businesses in China can pursue their operations assured of transparent business practice standards, including full disclosure of state subsidies for domestic companies, protection against unauthorized sharing of confidential information, communications access to industry standards authorities, and protection against forced technology transfers to domestic partners and freedom from interference in technology licensing contracts. These protections and disclosure practices help create a level playing field for overseas and domestic businesses, while enabling foreign companies to make accurate, informed business decisions regarding the China market.

The Comprehensive Agreement on Investments is landmark trade deal in a broader aspect; like the Regional Comprehensive Economic Partnership in Asia, the agreement stabilizes international trade, protecting against disruptions arising from unilateral maneuvers such as the series of tariffs and sanctions enacted by the United States against China during the Trump administration that affected supply chains, businesses and economies worldwide. The fact that the European Union committed to the deal prior to the inauguration of the new United States Presidential Administration demonstrates that the international community in both Europe and Asia will move forward on globalized trade without the need for consultation or coordination with Washington D.C. Stability of standards and practices is ones of the most vital factors in the global economy, and the strength of these trade agreements ensures that geopolitics will not interfere with business as the world recovers from the recession.

The Comprehensive Agreement on Investment marks an exciting new chapter in the Asian Century at the beginning of a new year and a new business cycle. Market access for European companies comes at a crucial time, as China opens its market while lifting its population’s capacity to consume as part of its efforts to develop a coordinated international and domestic economic strategy. Accessing China’s consumer market is the opportunity of a century, and we are excited to help our clients benefit from the beginning of this new phase. Should you have any enquiries regarding pursuing a business project in either China or Europe, we are always available for a free initial consultation.