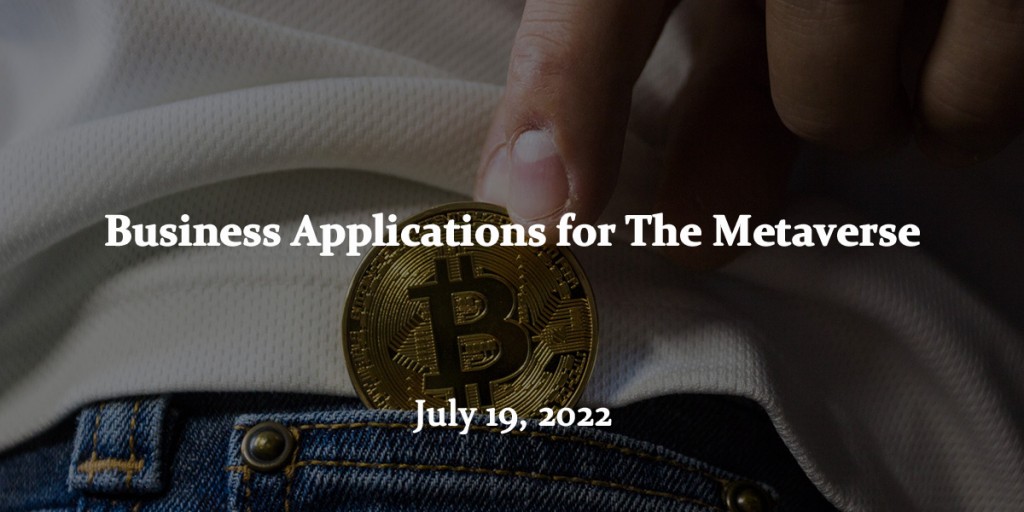 Business Applications for The Metaverse

The Metaverse is one of the most keenly discussed and followed topics across all industries, from arts and media to finance and even real estate.  Considering the extent to which the subject is saturated with news coverage and speculation, we feel it is essential for our clients to develop a solid understanding, and we have prepared an overview accordingly.

Although the Metaverse is sometimes perceived interchangeably with online gaming, its intended scope encompasses the next generation of internet platforms, known as Web3. This means it covers any economic activity processed through online networks, from commerce to education and healthcare. The key driver of this generational shift is blockchain.

Blockchain has enabled verifiable individual ownership of digital assets, and the consensus across industries is that internet users, particularly digital natives, will increasingly draw less distinction between their online and offline identities. This partly includes the assets they hold and exchange, but also the way that they communicate, work, and participate in networks.

Blockchain technology provides the basis for a new level of disintermediation in financial services and transactions of any nature- this means that any party can enter into any kind of formal agreement, without the need for trust that the terms will be upheld, because smart contracts automatically execute the conditions of the agreement with the capacity to track all activity on each side. Trustless transactions can exponentially scale the volume and frequency of economic activity on digital networks.

Considering this capacity in light of current trends in hardware development, like the iPhone’s lidar scanner, and how users apply them in day-to-day life, makes the potential for business applications look substantially different, because of the possibility for people to interact with their physical environments and social networks in completely new ways.

Advances in hardware and software allow anyone to create a digital twin for any person, object or place. Digital twins are expected to become an integral aspect of product lifecycles. This can allow for social and economic activity to take place by connecting digital identities and resources in various ways- for example, customers visiting a virtual retail outlet with a personalised digital representation of themselves, or attending virtual conventions and expositions where they interact with functioning product prototypes. These kinds applications are widely anticipated given current hardware development and social media trends.

Extended Reality (XR), which includes AR and VR technology, is a useful framework in understanding how the Metaverse works. Augmented Reality (AR) allows for technology to enhance people’s interaction with the physical world, whether by scanning objects or even entire areas, such as a bedroom, and importing a 3D rendering online, or something as simple as monitoring people’s body temperature from a distance. Virtual Reality (VR), on the other hand, allows people to exist in completely new spaces, allowing for completely new channels through which people can provide and receive services and experience content. The crossover between physical and digital worlds could potentially create economic opportunities worth USD 13 trillion.

By expanding the space in which communications and transactions take place, the Metaverse allows for online platforms with the same economic value for digital assets that people can expect from physical property, because of the NFT.

The NFT (Non-Fungible Token) is a blockchain application that confers full ownership rights over a digital asset. Unlike purchasing a digital copy of a book or a movie, an NFT is verifiably unique, like an individual car or apartment. Because it is individually unique, an NFT can grant the owner the ability to license, resell or even raise capital when leveraged as collateral.

We are already seeing several basic applications of the principle of extending value created with online products to the offline world- the Bored Ape Yacht Club NFT, which consists of a series of individually distinct cartoon images which vary in rarity and value and can be used as profile pictures when purchased. They confer certain membership benefits to holders, such as access to exclusive events and networking opportunities.

The concept of exclusive access to NFT holders is also being applied in restaurant ventures, which issue collectable digital items that grant access to fine dining experiences. The NFT is also a memento that signifies status for the holder. These online-to-offline extensions of value (and inversely, offline to online) could develop considerably more substantial features, in the same way that the interconnected networking evolved from text and email to what we have today.

NFT’s can be considered the building blocks of virtual Metaverse worlds, such as The Sandbox, one of the most popular such platforms. The Sandbox is a virtual world that users can access on desktop and mobile, that issues NFT’s which function like deeds to plots of virtual land within its ecosystem.

The platform is owned and operated by Hong Kong based Animoca Brands, and it has made a considerable impact around the world, with major international brands, including Samsung, Adidas and Hong Kong’s public transport operator the MTR investing millions of dollars in its virtual real estate market. While The Sandbox has made the most impact in Hong Kong,  Decentraland, Facebook’s Horizon Worlds are major Metaverse platforms, and a clear international market leader has yet to emerge. The social gaming apps Roblox and Fortnite also have many of the same features and characteristics, although they do not currently offer virtual land sales.

As with any online platform, the main purpose of virtual real estate is to engage users and monetize products with compelling content in an immersive environment. The principle is similar to ecommerce and social media, except with a much broader scope made possible by three-dimensional movement and graphics that provide a much richer sensory experience, allowing for a greater depth of gamified marketing and communications strategies, because it has all the elements of a full-fledged 3D video game. To this end, developers such as Animoca Brands provides accessible design tools for companies to build assets and create user experiences on its platform.

In this sense, the Metaverse can be considered a logical progression of gamification- the application of video game design principles in online platforms, whether the purpose is marketing, ecommerce, education or employee management. Collectability, community, competition, achievement, status and self-expression have proven to be highly effective drivers of engagement on a wide range of platforms, and Metaverse ecosystems not only provide more advanced frameworks to engage users, but also a basis on which products and services can be comprehensively monetized.

For example, the MTR’s Metaverse train station includes a railway museum in which visitors can learn about the history of the transportation service and observe 3D models of trains used over the years. This could eventually function as a storefront in which to sell MTR memorabilia, which are already popular among at gift shops, while it is very likely that gamified experiences with transferable rewards will prove popular among the more enthusiastic segments of the service’s market.

The Metaverse is still at an extremely early stage, and platforms are rife with speculation. Currently, the various systems and networks lack a universal standard of interoperability, which is an important step in developing platforms that encompass a substantial extent of social and economic activity. It is also not clear which service providers will emerge as major forces in the market.

Nevertheless, it is clear that the frameworks for a substantial long-term evolution are in place, and it is important for businesses to begin following the progress of the most popular platforms and observe marketing strategies, with a mind towards eventual applications for their own business model.