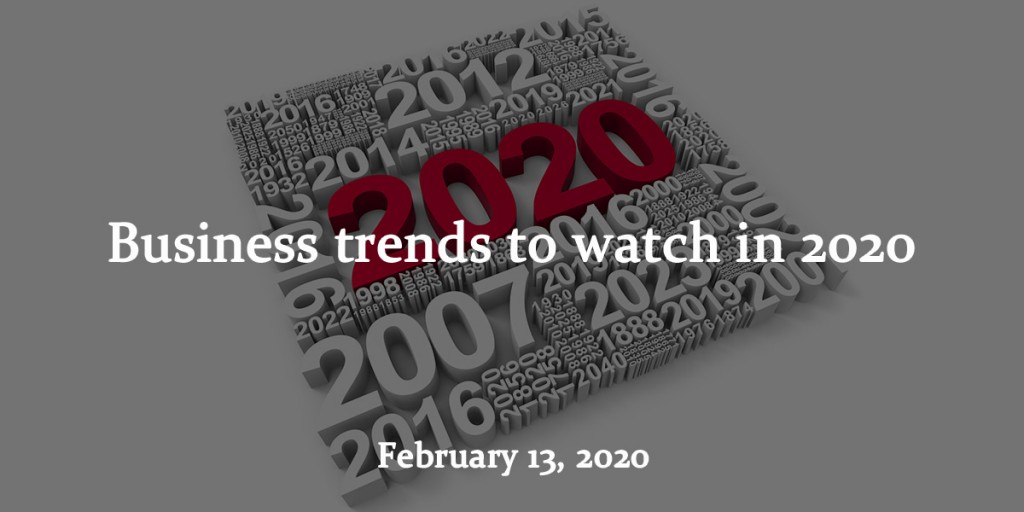 Business Trends to Watch in 2020

2019 has been a watershed year across the globe, with unprecedented uncertainty and unforeseen developments in every market, region and country. In the absence of normalcy and predictability in news headlines, some might assume that the only reliable forecast is to expect the unexpected. However, there are clear trends emerging in global business which indicate the direction of prosperity and progress in the years to come.

Carbon footprint: a primary concern for consumers and citizens

Communities worldwide are demanding environmental accountability from enterprises and institutions, and the momentum of such movements is set to reshape the political discourse in Western countries. The implication for global consumer markets is that consumers will make decisions based on the carbon footprint of a product’s supply chain and consider this factor as important as brand recognition and value for money. Over the course of just one year, widespread aversion to single use plastics have led the biggest retail brands to phase out plastic straws and packaging to the fullest extent possible, while governments have announced plans to eventually ban single use plastics altogether. Meanwhile, the market for alternative meat products has seen explosive growth in both Asia and the West, with plant based meat substitutes from new startups found on supermarket shelves across the world. The China market for plant based food products is estimated to grow to USD11.9 billion by 2023. This Green Economy that has emerged over the past 2 years is expected to continue to shake up markets in 2020.

2019 marked a turning point for the paradigm of growth over all other considerations. For the first time, a widespread consensus was reached regarding corporate impact on climate change and income inequality. The effects that corporations have on societies around them, are no longer overlooked, whether by consumers, politicians or the companies themselves. Rather than carrying out Public Relations overtures, corporations now see social responsibility as an essential aspect of governance, with sustainable business practices serving the mutual interests of employees, consumers and companies over the long term. This fundamental shift, from serving shareholders to serving stakeholders, was announced by the US Business Roundtable, comprised of the CEO’s of the largest companies in the US. Similar shifts are to be expected from major conglomerates in Europe and Asia, marking the beginning of a commercial context where sustainability is a driving factor for business operations across supply chains and markets. According to the Financial Times, enterprises, institutions and governments will have to establish standards and reporting organizations to realize the goal of purpose driven profitability. The shift in terms of corporate and business culture, however, has already begun.

Far beyond a selling point for the latest phone models, 5G is set to overhaul consumer data analytics, expanding the scope of data collection beyond apps and social media accounts into physical space and real world behavior through the use of 5G connected devices and biometric recognition technology. While the technology has been associated with governments deploying facial recognition systems in public spaces, biometrics are also at the forefront of companies engaging with consumers. Airlines are beginning to trial the use of biometric recognition for boarding passengers, while marketing and consumer-brand relationships are expanding into new dimensions with facial recognition in retail spaces, face-mimicking advertisements and eye tracking hardware. This unprecedented level of gauging consumer engagement goes beyond screens into physical space, with a new level of insight into consumers and new marketing platforms. Regardless of the enterprise, market research will be a completely different process over the next decade.

The Financial Times predicts that 2020 will be the year that Asia resumes its historical position as the center of the world economy, as Asian economies produce more than the rest of the world combined. This is due in large part to the development of the economies of China and India, while Indonesia and Vietnam are also set to outperform many European economies. Along with Japan and South Korea, the combined economic output of ascendant Asia will create a new global financial center of gravity. Although Asia’s biggest economies still lag the US and European Union in Purchasing Power Parity, 2020 marks the beginning of the global realignment.

Asia’s imminent re-emergence means that global business trends will manifest most vibrantly through Asian economies and markets, with Asian enterprises and institutions likely to chart the world’s economic development and direction through sustainable industry, values-driven governance and innovative technologies of the future.