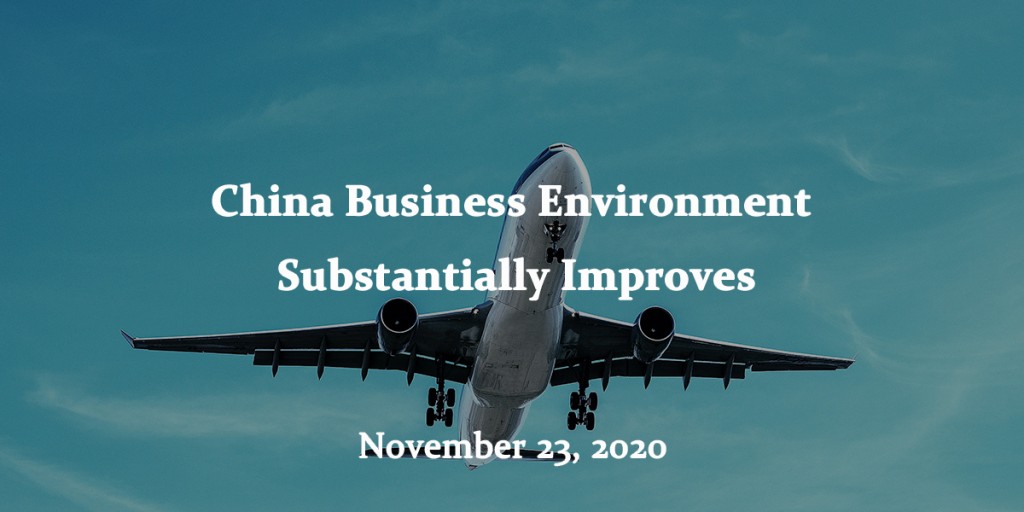 According to the World Bank’s 2020 Doing Business Report, The People’s Republic of China has substantially transformed its business environment over the past two years, having moved up its global ranking by 47 places, from 78th to 31st. with an ease of doing business score of 77.9 out of 100. China has also been named among the world’s fastest reforming jurisdictions with the most notable improvements out of the 190 economies assessed in the report. By comparison, the Hong Kong Special Administrative Region was ranked in 3rd  place, with a score of 85.3. Meanwhile, China’s National Development and Reform Commission  (NDRC) has released its own report in October, detailing the governments’ progress in optimizing the business environment.

The World Bank’s Doing Business Report measures five major aspects of business operations- company setup, obtaining a location, financing, daily activities and the security of the business environment– by assessing various categories of regulation, which include:

According to a supplementary paper from the World Bank, China’s success in developing its business environment in 2020, business regulation reforms have generally been shown to improve productivity, increase employment, and the number of new business startups, and lower credit rates in any economy. The degree to which China has simplified registration and licensing procedures while improving legal procedures and commercial services over the past two years is likely to significantly contribute to the flourishing domestic economy in the near future.

The World Bank paper attributes China’s success in business reforms to strong central government leadership, tailor made reforms at the regional and municipal level by local governments, a nationwide evaluation and award framework that monitors and incentivizes reforms across regions, the pioneering application of digital resources in government services, liaising with the private sector and collaboration with multilateral institutions.

The NDRC report notes the further reduction of items on the Negative Lists, including the National Negative List, FTZ Negative List and Negative List for Market Access. Foreign Invested Enterprises now have less restricted nationwide access to financial services and investments, vehicle manufacturing and agriculture. In Free Trade Zones (FT2), wholly foreign owned enterprises are now allowed to set up and operate vocational training schools. Foreign businesses may also apply for exemptions from the Negative List in some cases.

The lifting of restrictions on foreign investment and enterprise ownership indicates the PRC’s shift towards developing the domestic consumer economy through strategic, coordinated foreign investment and collaboration.The central government will continue with easing market access, developing a standardized business environment evaluation system for local governments, and the development of a globalized, market driven ecosystem backed by the rule of law. Lin Nianxiu, vice-minister of the NDRC, stated that the commission will continue with its efforts to streamline administrative processes, ease regulations and optimize government services.

According to the World Bank Paper, the Beijing and Shanghai municipal governments have been leading the way for these nationwide business environment enhancements through Business Environment Reform Schemes (BERS) that streamline and integrate government administration procedures for businesses while improving services for businesses. Shanghai has launched a “single window” online service for all government approval applications. The “single window” system connects and shares enterprise data among 49 different agencies while providing useful, individualized business guidance through the website. Shanghai’s Business Environment Reform Scheme will likely serve as a benchmark against which municipal government policies will be evaluated.

The collective nationwide data integration through municipal services and national administrative bodies centers around standardized formats and social credit codes, which uniquely identify companies and institutions in China through a digital identity. In conjunction with the digital blockchain currency, business transactions in China will be tracked through an objective system, establishing a standard of mutual trust and equality of treatment under all applicable business laws. This ensures that all enterprises will be able to function free of uncertainties regardless of whether they are a domestic or foreign invested enterprise, and regardless of which local government they may be dealing with. The level of transparency through interlinked data systems is unprecedented anywhere in the world, and it unlocks immense potential in business growth and the widens the scope of finance.

While China’s innovations and reforms are remarkable, the process is still at an early stage. According to Cui Weijie, director of the Institute of Industry Development and Strategy, the central government has to continue with its efforts to improve the business environment for enterprises. These latest developments are neither the beginning nor the end, as China’s business environment enhancement is an ongoing process, as seen with 2015’s Fang Guan Fu reforms and the Foreign Investment Law passed in January 2020.

As China leads global economic growth and recovery in 2021 and beyond, we will continue to keep you updated on the latest developments. Should you require any assistance with establishing or enhancing a PRC enterprise, we are always available for a free initial consultation.