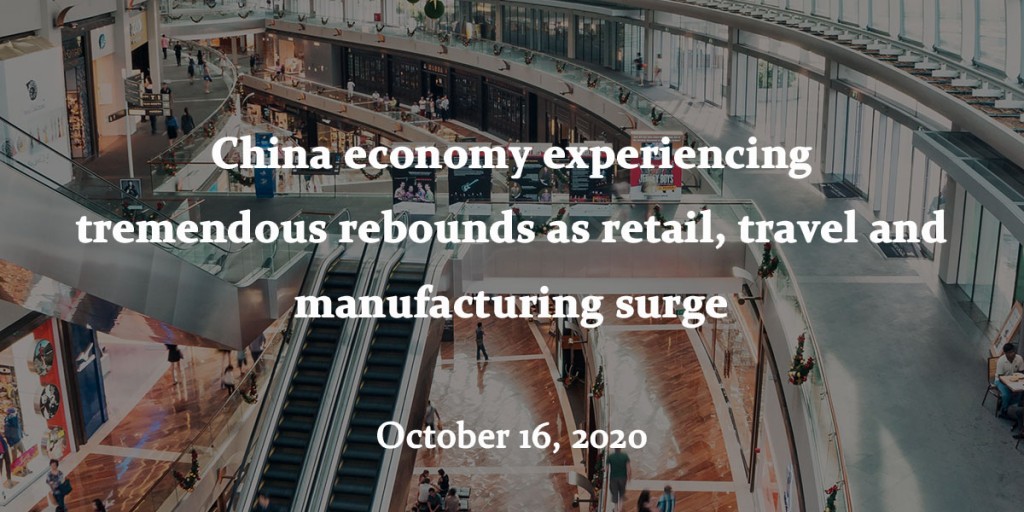 The People’s Republic of China’s economy exceeded all expectations in August and September, in large part due to high-income consumers purchasing luxury products at an increasingly rapid pace. According to the National Bureau of Statistics, overall retail sales increased during the month of August, compared to the same period in 2019, while luxury product sales reports astonishing figures. Customers from China now contribute 50% of all global spending on designer brands, which in some cases report that sales have doubled in the PRC market. Meanwhile, the China Passenger Car Association reported an 8.8% increase in automobile sales compared to last year.

With the easing of social distancing measures and lockdowns, high income consumers appear to be increasing their consumption of luxury products at retail as domestic demand skyrockets after months of restriction and restraint. The domestic luxury retail sector in China is set to benefit from local spending that might otherwise have happened overseas, as lockdowns and uncontrolled outbreaks in Europe and the United States have brought tourism to a standstill.

In fact, China is widely projected to take center stage in the world’s luxury retail market from 2021 onwards, as the EU, UK and United States face an uncertain and prolonged period of economic recovery. Boston Consulting Group has released a report in collaboration with Tencent Marketing Insight that projects 20 to 30% growth in China’s  luxury market in 2020 alone. The scenario is the exact inverse of the luxury products market outside of China, which BCG predicts will contract by as much as 45%. The cultural shift towards online retail sets up additional opportunity in Cross Border E-Commerce, the efficient standby strategy for importing luxury products to China.

China’s economic rebound extends beyond the luxury market as domestic travel resumes on a national scale. The Golden Week holiday in early October saw a surge in domestic travel and tourism, estimated at around 550 million people taking long distance trips to popular tourist locations across the country, in what has been described as “revenge travel”. The volume of such travel indicates a broad economic recovery driven by domestic spending across all sectors of the population, a transition that was already underway prior to the epidemic, now expedited even further due to the slowdown in international trade.

Meanwhile, international travelers will be permitted to re-enter the PRC with their previous visas or residence permits, provided that they are traveling for the same purpose, while application processing services for new visas have resumed in most of Europe. With the resumption of domestic and international travel, social and economic activity in China is likely to not only return to pre-pandemic levels, but grow at an accelerated pace with months of unfulfilled demand, and a lack of alternatives at the same scale. This confluence of factors creates a historical level of opportunity in the PRC market, as the economic rebound and recovery in the consumer market outpaces other countries.

While domestic consumption and travel continue to flourish, the country’s rebound and recovery requires all population demographics to participate in the economy. Although luxury retail and tourism are largely driven by the wealthy, the resumption of manufacturing activity indicates that the return of domestic employment among the working-class population will boost consumption across all markets and sectors. The Wall Street Journal reports that China’s exports are higher than previously expected, partly due to overseas demand for electronics and networking equipment.

China’s Purchasing Managers Index (PMI) for September 2020 is the highest in years, and manufacturing will likely continue to grow as a result of three factors: the demand for digital home solutions for office work, social activity and entertainment in countries still under lockdown, the rebound demand for products assembled in China as overseas economy’s gradually recover, and the slower pace of moving manufacturing out of China until the pandemic stabilizes around the world. Although various unpredictable factors will continue to affect international business and manufacturing in China over the next two years, all available data indicates a certain level of growth and stability regardless of whatever challenges the international community may face.

Forecasts published before the pandemic predicted that Asia would become the center of the world economy in 2020. The events of the year have borne this out faster, and to a further extent than previously imaginable in large part due to China’s success in controlling the outbreak and restoring its domestic economy. As things stand, China is now poised to lead global economic growth, and we at Fung, Yu & Co. would love to help people and companies from anywhere in the world access this amazing market that is full of unlimited opportunity.