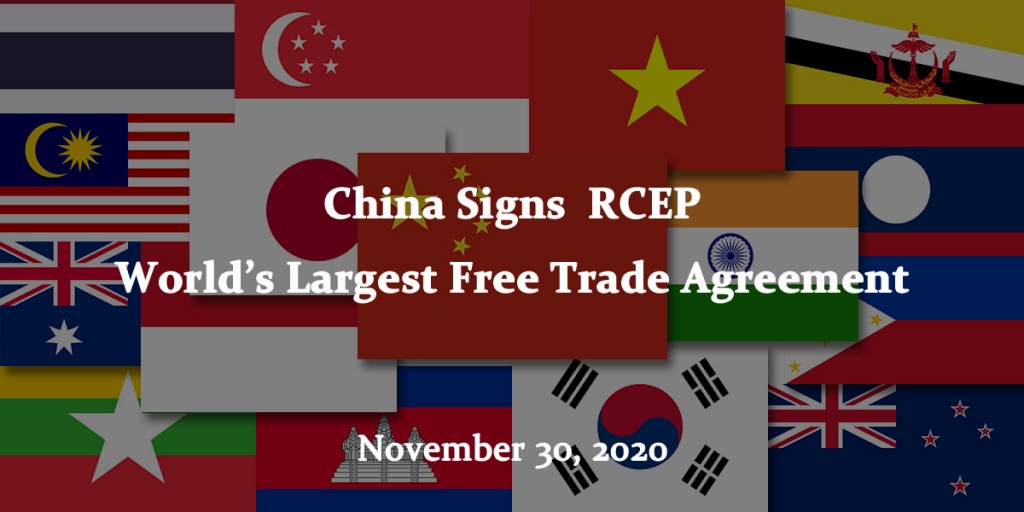 In November 2020, The People’s Republic of China, along with 15 other countries in the Asia-Pacific Region, signed the Regional Comprehensive Economic Partnership Agreement, the world’s largest multilateral free trade framework based in the Asia Pacific Region. The countries participating in the agreement  include the 10 ASEAN member-states, South Korea, Japan, Australia and New Zealand. The RECEP is the first major multilateral free trade agreement of this scale that China has joined, signaling a new level of opening and expansion for the economy as the PRC begins to lead global economic growth.

The RCEP standardizes the rules for designating the country of origin on shipments within the members, and requires that countries participating in the agreement do not impose tariffs on duty-free designated imports. Tariffs are generally limited to sensitive or strategically vital industries. RCEP members comprise almost one third of the global population, and contribute almost 30% of global GDP.

According to Paul Chan Mo Po, Financial Secretary of the Hong Kong Special Administrative Region, the Hong Kong government will work towards joining the agreement as a separate customs jurisdiction from Mainland China. Hong Kong already has an active free trade agreement with ASEAN.

Chan notes on his blog that while Hong Kong actively contributes to China’s internal circulation, the region will also work towards expanding external circulation through the long term development of regional supply chains and resource distribution networks while generating high level growth for the local economy. New members will be able to sign the agreement 18 months after it is ratified.

The RCEP will come into effect once it is ratified by six ASEAN members and three non-ASEAN members. The agreement was originally conceived in 2012 and went through numerous rounds of negotiation over the subsequent eight years, before it was signed on November 15, 2020 at a ceremony attended by country representatives through video conferencing. The advent of the US-China trade war, US withdrawal from multilateral free trade agreements, and the widespread economic fallout and the urgency of recovery from the COVID-19 pandemic in 2020 accelerated the pace of negotiations during the second half of the decade.

According to the New York Times, the RCEP demonstrates that the international community will pursue multilateral trade without the US if necessary, as the superpower increasingly turns inward to face domestic challenges. A senior fellow at the Peterson Institute for International Economics told the New York Times that the RCEP helps companies develop more flexibility with their supply chains in order to evade US tariffs, shift manufacturing from China to ASEAN, and retain access to the China domestic market.

Many members participating in the RCEP already have bilateral trade agreements in place, which the RCEP links together on a bigger scale. In some cases, the RCEP is a major milestone for trade between major Asian economies. The agreement is expected to eliminate 86% of tariffs on industrial goods exported from Japan to China, while 92% of Japan’s exports to South Korea will be exempted from tariffs.

Wang Shouwen, Vice Commerce Minister of the People’s Republic of China, announced  last year that the PRC central government will improve transparency for foreign investments by abolishing all restrictions on foreign investment aside from those included on the negative lists. The controversial practice of “technology transfers”, where foreign companies have felt compelled to transfer their Intellectual Property to China-based partners will also cease. Wang also said that the Ministry of Commerce will take measures to provide foreign investors with access to the financial industry.

These reform measures, together with the dual circulation strategy and the RCEP, indicate that trade within the Asia pacific region is set to expand over the coming years with China’s expanding consumer economy and strategic foreign investment playing a leading role. These major breakthroughs in regional and global free trade continue to bear out longstanding predictions of the new Asian Century, as the center of global economic activity shifts to the region faster than anyone anticipated.

We are excited for the possibilities this brings companies and enterprises throughout the region, particularly in Hong Kong, Mainland China and the Greater Bay Area. During this historic moment of opportunity for busines in Asia, our longstanding experience linking Hong Kong based companies with the Mainland market and bridging Asia with Europe can help bring visions to life and develop new horizons for your prosperity. Should you have any enquiries about developing or enhancing a business platform, we are always available for a free consultation.