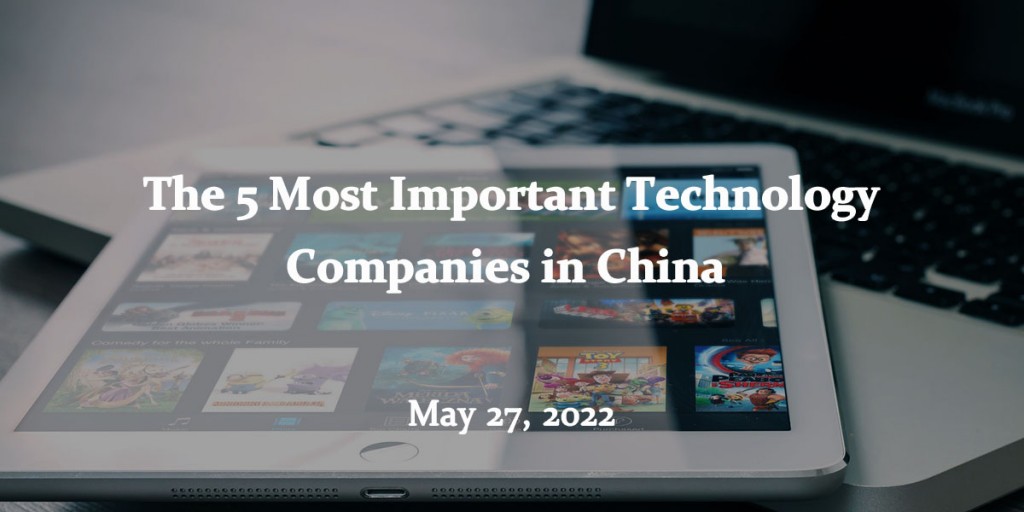 The 5 Most Important Technology Companies in China

China’s technology sector has played a major role in the country’s emergence on the global stage. Innovation moves fast in China’s markets, reflected by the local economy’s early adoption of mobile payments, ecommerce, fintech and digital currencies. China also leads the world in A.I applications, from advanced facial recognition to machine learning algorithms that drive the success of social media apps. The culture of data-enabled social innovation in business is particularly noteworthy, considering the world’s most widely used social media app, TikTok, and the biggest  international fashion retailer, Shein, are both Chinese companies that have driven their worldwide market leadership by integrating machine learning and user data in their business models.

Shein and Tiktok only represent a small fraction of the value that China’s technology sector creates. Considering that China is the world’s largest consumer market with a robust network infrastructure and  high rates of technology adoption, technology enterprises fiercely compete to serve users on a scale that as no parallel anywhere else in the world. The Harvard Business Review notes that one of the key elements of China’s innovation ecosystem is its population’s willingness to embrace new products, services and platforms.

China now has at its disposal a resource that no other country has: a vast population that has lived through unprecedented amounts of change and, consequently, has developed an astonishing propensity for adopting and adapting to innovations, at a speed and scale that is unmatched elsewhere on earth.

Alibaba, founded by the famed entrepreneur Jack Ma in 1999, is the largest ecommerce company in China. It provides several of China’s most widely used shopping and payment platforms, while also developing leading fintech and cloud computing services.

Alibaba’s original service is its namesake business-to-business wholesale platform. It also runs a consumer-to-consumer marketplace, Taobao, and a business-to-consumer sales channel, TMall. All three of these platforms rank among the busiest websites in the world. Alibaba is also a leader in payment services with Alipay, and cloud computing, with Alibaba Cloud. With R&D facilities located in Hangzhou, Beijing, Hong Kong, Singapore, California and Dubai, Alibaba is one of the world’s largest Artificial Intelligence developers, and its extensive holdings in entertainment, media and sports make it one of China’s most important companies overall. It is also a major venture capital enterprise through Alibaba Entrepreneurs Fund.

Based in Shenzen, Tenzen is one of the world’s largest multimedia companies and the world’s largest video game publisher. Originally founded in 1998, the conglomerate is most well known today for its social media Mega-App, WeChat, which dominates all aspects of everyday life in China, from communication and social media to marketing, customer service, content consumption and payments. While in most places people might search for a particular restaurant or service on Google, make a reservation over the phone, pay with a credit card, leave a review on social media and recommend the business to friends over WhatsApp, customers handle every single step of this process within the WeChat app.

Tencent Games invests in both the domestic and overseas video game markets, and several of its properties, such as League of Legends and Battlegrounds, have made a  worldwide cultural impact. Tencent owns and invests in numerous software developers around the world, and China, the video game userbase and market is primarily within the conglomerate’s  ecosystem. Tencent also provides leading music and video streaming services in China.

Baidu is one of China’s original online services, having provided search, advertising and navigation services for domestic web ecosystems since 2000. Baidu offers 57 different services, cloud storage,  an online encyclopaedia, desktop and mobile maps, and keyword discussion communities. Baidu also provides news services, indexing and serving news content soon after it is published to the web in a simple accessible and searchable format that provides recommended articles related to  related topics and headlines so that users can easily compare viewpoints from different sources and quickly gain a complete perspective on issues.

Baidu provides a patent search engine and a statistics search service, which has made it a vital resource for market research in China.

Originally founded in 2012, ByteDance is the company that developed the worldwide phenomenon Tiktok, as well as its China-market version, Douyin. Titktok’s short video format, paired with its content recommendation algorithm and minimalistic user interface, has proven to be the most effective audience engagement strategy in the world.

The Chinese version of the app, Douyin, includes additional features, such as in-video search. This allows users to perform searches based on faces that appear in videos, in order to find more content featuring performers or influencers that they find interesting. Douyin also leverages its advantage in user engagement to provide online retail, hotel bookings, and location-based reviews for businesses in China.

With Douyin, Bytedance has revolutionized social media marketing in China, by dynamically integrating its content with the way people consume products and services. Marketers can quickly capitalize trends emerging on the platform by collaborating with the right influencers and converting audiences into customers without them having to leave the app. This approach to marketing exemplifies China’s distinctive social media and ecommerce ecosystems, which continue to outpace the level of innovation seen anywhere else.

Meituan is an ecommerce platform for consumer products and services, including dining, delivery, travel and entertainment. Meituan initially offered food and consumer product delivery services with the standard online-to-offline model, providing convenience and value for customers while driving revenue for local businesses across China. However, the platform expands on the possibilities of location-based services on user’s smartphones.

Branding its services as “local life”, Meituan’s core service allows its users to do far more than simply ordering food and groceries. Unlike other delivery services, Meituan has also expanded the concept and developed a business network that creates value for users wherever they are, by tapping the domestic tourism market. Meituan users can book hotels, try new restaurants or discover new products and experiences nearby their location, all within the app, while traveling or exploring cities in China. For example, Meituan users can receive push notifications from nearby stores based on their profile, needs and preferences.

Meituan extends a complete online-offline integrated service for local retail and tourism, making it the market leader for location based ecommerce. As with many Chinese ecommerce platforms, its level of innovation and comprehensive integration in local markets is still unmatched by comparable services in other countries.

Accessing the right platform for your product’s market

China’s technology companies play a vital, indispensable role in the domestic consumer market. It is almost impossible to do business in China without going through channels that the country’s leading technology services have established, because Chinese consumers rarely venture outside these ecosystems.

We will be launching tailored services that enable businesses from Europe and other regions to develop their brand and distribute their products through China’s most important sales channels, such as Alibaba’s TMall. In the meanwhile, you have any enquiries about business and marketing strategies in China, we would be happy to schedule a free initial consultation, anytime.