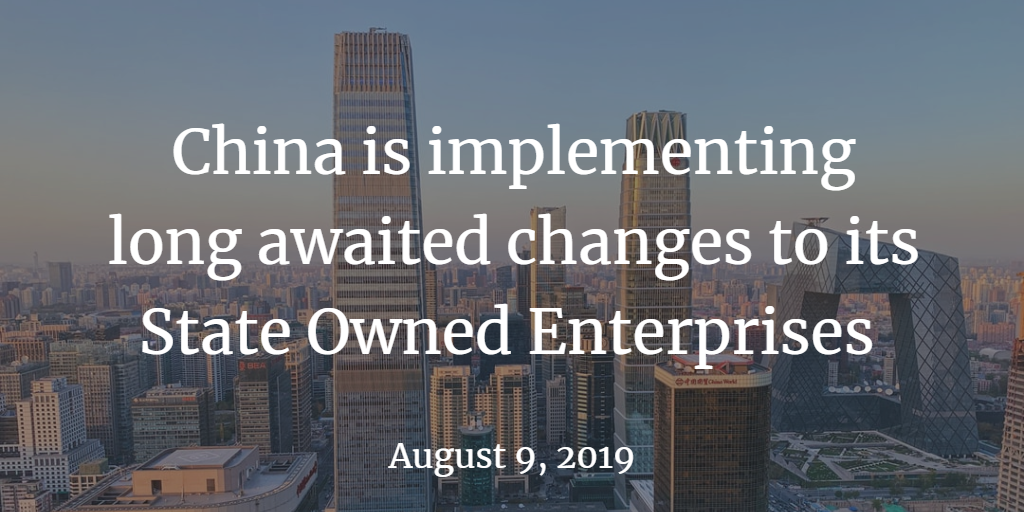 State Owned Enterprises (SOEs)(國有企業,簡稱“國企”) contribute 30% of China’s GDP. They are currently organized into four groups: those regulated by the central State-Owned Assets Supervision and Administration Commission of the State Council (SASAC)(國務院國有資產監督管理委員會,簡稱“國資委”), enterprises regulated by local level SASACs, financial institutions under the control of Central Huijin Investment Limited(中央匯金投資有限責任公司,簡稱“中央匯金”) and enterprises supported by the Ministry of Finance. The reform of SOE ownership models presents an important development for China investments.

The SASAC was established in 2003 in order to implement the government’s policy of ‘grasp the big, release the small’. State Owned Enterprises are privatized by mergers and acquisitions, asset sales and IPO’s. Historically, State Owned Enterprises have played a large part in the development of infrastructure, particularly the rapid development of new cities.  Although it is the state who sets up these companies in China, as property rights frameworks and markets develop, more SOEs would be in a position to be privatized in a profitable manner.

The reform of China’s State-Owned Enterprises is a highly anticipated step forward in the development of its economy as it transitions from a centrally planned model to a more market driven system. Although the state leadership announced plans to change the role of the government from managing state capital rather than SOEs themselves, there is still debate within the PRC over the issue of equity and management. However, changes are already underway in selected sectors, with further reforms planned for 2019.

In 2017, the central government established two categories for SOEs, investment groups and operating groups. That same year, China Unicom sold 35.2% of its shares to private investors, including Baidu, Tencent and Alibaba. In 2018, the central SASAC began the process of transitioning 150 subsidiaries of State-Owned Enterprises into a mixed ownership model. These subsidiaries are mainly in the manufacturing, technology and materials industries, which have been considered important sectors that require strong state influence. Another 100 are set to follow in 2019. In total, the government plans to reform 404 SOE subsidiaries under the mixed ownership model by 2020.

The Zhuhai government’s planned sale of 15% of Gree Group(格力集團), which controls the world’s largest air conditioner manufacturer, Gree Electric(格力電器), reflects a major issue in the debate over SOE investment in China- whether company management should oversee the privatization process, in this case the manufacturer’s chairwoman and former group chair, Dong Mingzhu, or whether control should remain with the state in order to minimize risk.

The China Unicom sale and Mingzhu’s disagreements with Gree Group’s controlling shareholder, the government, would indicate that the latter perception prevails, given that the private investors have a negligible presence on the board of directors and only own three percent of the company on average. Investments in China’s SOEs therefore continue to differ from private enterprise investments. However, with private capital of over RMB 90 billion in 2018 alone, mixed ownership reforms will be a topic to follow for some time to come.

Developments in both international and domestic politics further complicate the equation for SOE reform; the U.S government’s trade war is likely to provoke a pattern of centralization and coordination in all sectors, especially in areas related to networking and information technology. Furthermore, the government has passed many laws in the past 3 years that require private enterprises to embed the China Communist Party’s authority in their articles of incorporation as part of the process of setting up a company in China.

There is therefore a 2-way pattern of direct state ownership transitioning to mixed and private ownership, while the line between state and private management seems to be increasingly blurred from some perspectives. According to a government survey, 68% of domestic companies and 70% of foreign companies already had extensive government liaisons.  Despite this, the government’s intention is to develop a thriving independent market to facilitate its transition towards a consumption driven economy, as demonstrated by extensive tax cuts and venture capital funds.  Any situation where government bodies exercise their right to participate in management decisions is likely to be in the interest of the company’s profitability.

While the trajectory of China’s development continues, major changes create both opportunity and challenge. As the PRC’s economy continues to open to the world, timing and adaptation are decisive factors in success. Be sure to follow our updates and contact us with any enquiries about your business setup in China. We have decades of experience and comprehensive knowledge of the local business environments in China and we are continually committed to providing you with world class accounting auditing and tax services. Whether you want to register a new business or subsidiary company, open a business bank account or gain a better understanding of business taxes in China, we can develop the ideal solution for you.