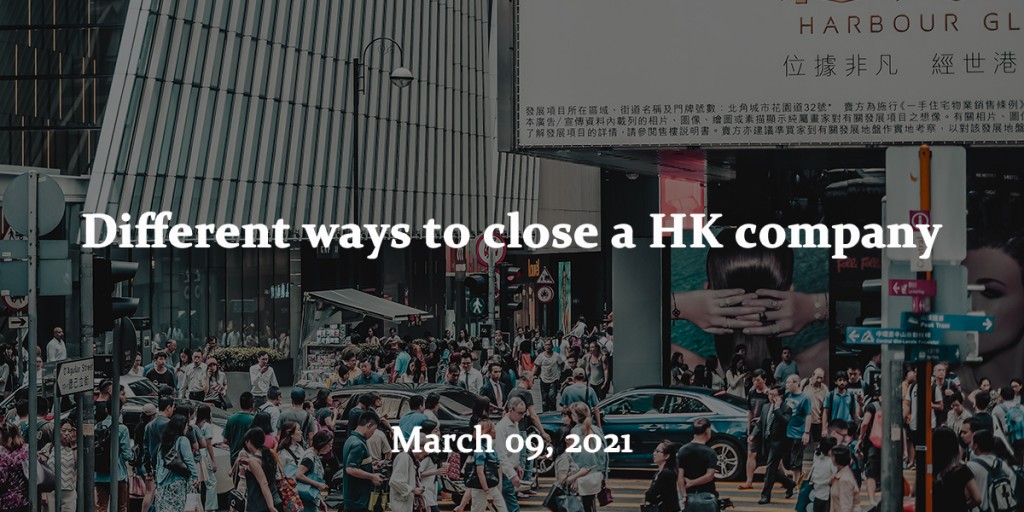 There will be times when entrepreneurs want to close down their businesses, and there are various ways of doing so in Hong Kong.  Below is a brief introduction about the means of closing a business in Hong Kong.

Business organizations in Hong Kong may either be sole proprietorships, partnerships or company.  When there is a cessation of business for unincorporated business (i.e. sole proprietorship or partnership), you must notify the Business Registration Office of the Inland Revenue Department within one month of your date of cessation in writing.  Business registration fee and levy must be paid up to and including the year in which the business has ceased.

The remaining portion of this article mainly focus on the ways to close a HK limited company.

A company may be dissolved by either (a) deregistration of defunct solvent companies; or (b) winding-up.

(a)  Deregistration of defunct solvent companies

Deregistration is a relatively simple, inexpensive and quick procedure for dissolving defunct solvent companies.  The conditions to be met when applying deregistration are:

An application for deregistration must be accompanied by a Notice of No Objection issued by the Commissioner of Inland Revenue.

Upon dissolution, all the company’s property, if any, is vested in the Government of the Hong Kong Special Administrative Region as bona vacantia (i.e. ownerless property that passes to the Government)

Although deregistration is a comparatively cheaper and simpler way to close a company, the largest drawback is that an aggrieve party (e.g. a creditor) may apply to the court for an order to restore the company.  If you consider to clear all contingent liability once and for all, wind-up will be a preferred choice.

Winding-up means that all the assets of the company would be realized through a legal process in order to repay its debts.  It may either be (i) voluntary or (ii) compulsory.

(i)    Voluntary winding-up: A company can only be put into members’ voluntary winding-up if it is solvent (which means the company will be able to pay its debts in full within a period not exceeding 12 months from the commencement of the winding-up), where the directors must execute a certificate of solvency.  Note however if the Certificate of Solvency is later proved to be fraudulently executed, the directors will be liable to a fine and/or imprisonment.

An insolvent company can only be dissolved by a creditors’ voluntary winding-up, it can be done under section 228A of the Companies (Winding Up and Miscellaneous Provisions) Ordinance (CWPMPO) where there is an urgent need of placing the company into liquidation and appointing a provisional liquidator to preserve the company’s assets.  A company can also be placed under a creditors’ voluntary liquidation under section 241 of the CWPMPO by passing a special resolution in a general meeting, where at least seven days’ notice must be given for such a meeting.

(ii)   Compulsory winding-up means winding-up by the court.  The company may either be solvent or insolvent.   The most common ones are:

Any person (e.g. employee) who is qualified for receiving legal aid under the Legal Aid Ordinance and Rules may apply to the Legal Aid Department for assistance in filing a winding-up petition.

We hope this article will help you understand more on the closing of a business in Hong Kong.  For further enquiries, please feel free to contact us any time.