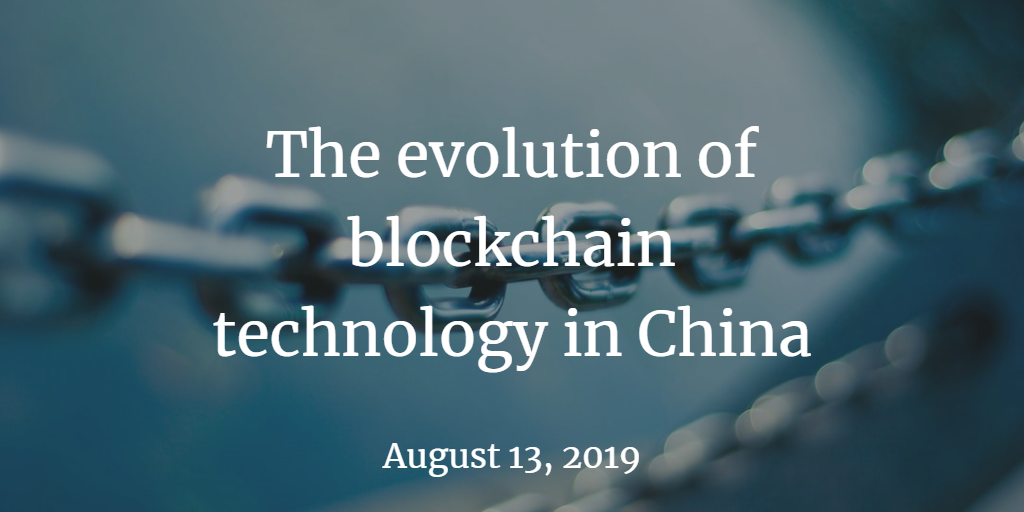 The evolution of blockchain technology in China

While the market for cryptocurrency investments such as Bitcoin and its many imitators has long since reached a point of over-saturation, the underlying technology, known as blockchain, already plays an important role in the development of the digital economy in China. Although the P.R.C government has banned all virtual currency trading and investments, China is at the forefront of blockchain innovation and development, in both public and private sectors. The technology was one of the three fields identified by President Xi Jinping as important parts of a “new industrial revolution”. Given these remarks, as well as the emphasis placed on its importance in CCTV programming where it was deemed “10 times as important as the internet”, blockchain technology is likely to play an important part in the government’s long term strategy in economic development as well as the trade war.

However, its implementation is already happening on an everyday ordinary level here and now. For example, Tencent has begun providing blockchain invoices for public transport fare payments in Shenzhen, while Alibaba will be using the technology in an international partnership to track food products, and its affiliate Ant Financial will record charitable donations. One of the biggest advantages of such tracking is that it eliminates counterfeit transactions, shipments and receipts.

The OECD has also taken a major interest in blockchain technology and related international public policy, having founded the OECD Blockchain Policy Center. Part of the reason for this initiative is to establish international agreements about the use of the technology, but it also reflects the importance the general public understanding what exactly blockchain actually is.

A blockchain is a distributed ledger- this is like the ledger used in any account, except that it isn’t under the control of one bookkeeper, because a copy of the record is sent across the entire network. All other copies in the network verify the record for each other. Depending on how the network is set up, it can be open to all users or configured with varying levels of restriction. An important difference between blockchains in the PRC and elsewhere is that the state will retain centralized control over the networks- however, third parties between users, that might charge transaction fees or compromise sensitive data will no longer play a role.

The scope of potential application is immense- smart contracts which automatically verify that the terms are met will change the way business is done, and new equity financing platforms will expand the scale of possibilities for investments. For example, blockchains can be used for security issuances to handle corporate debt, as well as in clearing and settlement in trading. Meanwhile, the government continues to research ways to use blockchain in global supply chain management, public security and communications.

At the dawn of a new era of financial technology, you can rest assured, stay informed and make the most of every step of the way with us. Stay tuned for updates.

If you plan to set up a company in China, we can draw on our expertise, experience and local knowledge. We are committed to staying ahead and keeping up to date with all developments in the legal and business environment, as well as financial vehicles. Don’t hesitate to contact us with any enquiry you may have about business setup, valuation, accounting, auditing and taxes in China.

OECD (2018), “The potential for blockchain technology in public equity markets in Asia”, in OECD Equity Market Review of Asia 2018, www.oecd.org/corporate/OECD-Equity-Market-Review-Asia-2018.pdf.