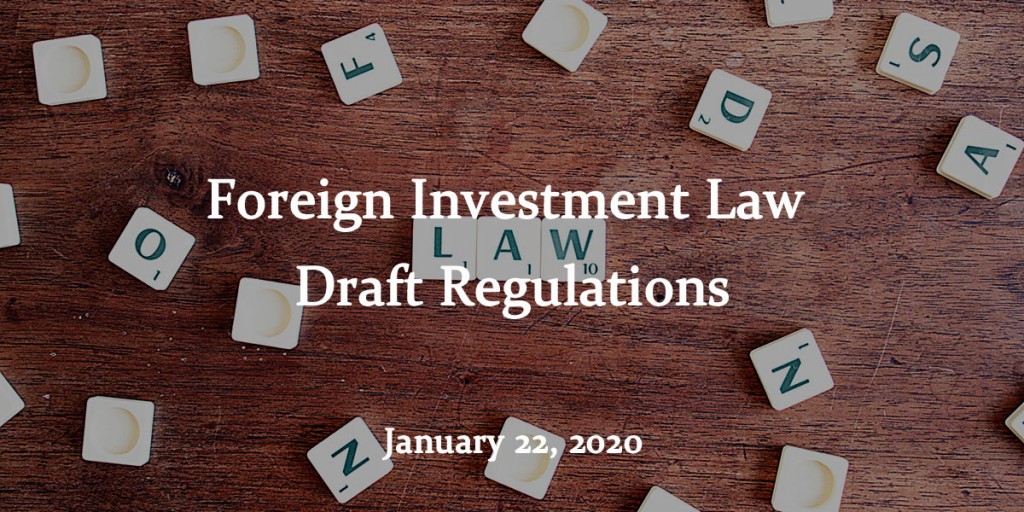 On November 1st, 2019, the PRC Ministry of Commerce and Ministry of Justice released the Draft Regulations on Implementing the Foreign Investment Law of the People’s Republic of China. The Draft Regulations document specifies important implementation details on the Foreign Investment Law, due to take effect on January 1st, 2020. While the document does not fully address concerns about the legislation’s vague wording, it reflects the PRC government’s intention to promote and protect foreign invested enterprises, while relaxing constraints on market access and capital management.

Highlights include Article 11, which calls for clear formalized regulatory policies to be  published and easily available to foreign enterprises, Article 24, which sets enforcement mechanisms for Intellectual Property rights, Article 25, which prevents forced technology transfers by any means, Article 26, which reduces the extent to which company trade secrets are exposed to government agencies.

Many of these measures are further reinforced by the enactment of additional legislation on trademark protections, intellectual property laws, market access reforms and relaxed restrictions on currency conversion.

Under Article 11, foreign invested enterprises can pursue compensation through a systematic enforcement process if their intellectual property rights are infringed. Article 11 addresses the enforcement mechanism, given that existing laws already protect property rights but widespread perceptions regarding consistent enforcement continue to be held outside the country.

Foreign Invested Enterprises in China are required to follow restrictions on investment, operations and equity participations set out in the Negative Lists. The Draft Regulations require foreign investors to meet quotas on voting shares in partnerships with domestic enterprises, which suggests that foreign enterprises will be able to participate in restricted sectors to a further extent than the Negative List currently allows, as long as the domestic partner retains a voting majority.

Negative lists now only function to restrict foreign participation in protected sectors, and foreign enterprises are granted “national treatment” in any sector not specified on the lists. The Draft Regulations state that the State Administration of Market Regulation will govern registrations and incorporations for Foreign Invested Enterprises, including all approval and filing procedures.

The Foreign Investment Law and Draft Regulations have provisions for unrestricted overseas remittances. The state now provides for unrestricted foreign exchange transfers without restrictions on amounts, currencies, or remittance schedules. This enables all foreign invested enterprises in China to raise and manage capital, regardless of the nature of their business activities. The new draft regulations also state that any such foreign exchange restrictions will be considered illegal. Capital controls by the government will be limited to tax administration only.

Under current PRC law, Joint Ventures can only be formed by foreign investors and domestic commercial entities. Chinese private individuals are not permitted to enter into business setup agreements with foreign investors directly, except through government authorized mergers and acquisitions. This investment structure creates unnecessary complications for many Joint Venture setups. The Draft Regulations clearly state that foreign investors can now form partnerships with Chinese individuals in the PRC, allowing for more flexible equity structures.

Article 28 states that local governments must enter into policy agreements in writing, keeping within the scope of authority allowed by the Foreign Investment Law and Draft Regulations. Article 42 requires foreign enterprises to change their administrative configuration within six months from the end of the five-year transitional period. Article 43 mandates that income distribution and excess property allocations in partnerships will remain valid for the duration of the term specified in the contract.

The PRC State Council also issued Regulations on Improving the Business Environment in October 2019, which guarantee business development and investment protections through institutional policy frameworks that establish an equal basis for all market entities. This includes setting up a streamlined negative list, consolidating a national framework to protect business interests in order to ensure equal access and opportunity for domestic and foreign enterprises.

From January 2020 onwards, China’s market landscape for foreign invested enterprises will be considerably different, while overseas investment is likely to continue increasing, despite challenges from slowing growth and trade war related challenges. Nonetheless, individuals and enterprises operating in the PRC should review their individual circumstances and how legislation will affect them going forward.  We have been based in China for over one decade, and our business advisory team would be happy to assist with any enquiries you may have about setting up a foreign venture in China or reviewing your circumstances in terms of compliance, exposures and opportunities.