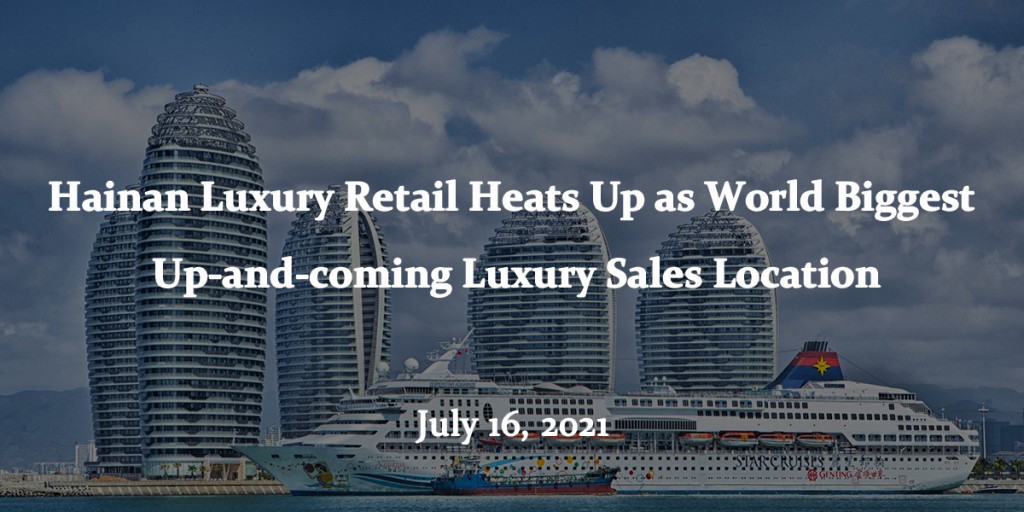 Hainan Island’s tropical heat is now set to spring the Chinese luxury retail market to new heights as the government moves forward with initiatives to develop the island as a world-class commercial center without tariffs, import duties, VAT and consumption tax on selected item categories by 2025. The central government announced their overall development plan for Hainan in June 2020, with the aim of developing a globally influential Free Trade Port by 2050. The plan is moving forward in stages and may eventually include visa-free entry channels for foreign nationals. While Hainan is presently viewed as a family holiday destination in China, it has come to the forefront of retail shopping development and customer experience innovation.

As of now, duty free shopping allowances have been increased threefold from RMB 30,000 to RMB 100,000, per person, per year. During a moment when overseas travel is on indefinite hold while domestic tourism thrives, Hainan holds a historical opportunity for the worldwide luxury retail sector in the world’s largest luxury products market, and the island is now an important focus for all major luxury labels.

Patrice Louvet, CEO of Ralph Lauren, describes Hainan as a “strategic priority” for the brand, having already opened three outlets on the island, with plans for another later this year. Meanwhile, the CFO of Estée Lauder Cosmetics credits shopping hubs in Asia for the conglomerate’s profits in 2020, a year when all other regions posted losses.

Capri Holdings CEO John Idol says that Hainan is “on fire“, and considers the island to be the only tourist destination in the world currently showing growth. Idol expects that the group’s labels, which include Versace and Jimmy Choo, will not see airport outlet sales recover until 2023. The current slowdown in other tourist destinations and travel hubs accelerates the pace of innovation in Hainan, as labels and outlets experiment with new, uniquely Chinese high-end shopping experiences to engage elite demographics.

In June 2020, Burberry collaborated with Tencent to launch its first “social retail” store in Shenzhen. The proof-of-concept location extensively integrates with a WeChat app to engage store visitors with interactive elements throughout the space. App users can adjust the lighting and select playlists in fitting rooms with their phones and scan QR codes for each item and display in the store to access exclusive content about the products and models.

The experience is gamified by granting users social currency points for every app interaction in the store, which progressively evolves an animal character that begins as an egg and develops more features with each interaction. The store also integrates with visitors’ social media accounts via installations such as a special fitting room designed with self-photography in mind.

Every element in the store is designed to be interactive, including a “living sculpture” window that displays a sparkling, ornate Burberry logo which appears to float in space and reflects the viewer’s body shape and movements. By priming interactivity in every aspect of store design, social retail stores are able to engage younger demographics that make the majority of their purchasing decisions online by effectively building a physical extension of social media, websites and e-commerce platforms.

The interactions taking place in these spaces also generate a valuable stream of user data that ensures customers can be effectively retained and served in the long run. With WeChat in China, the comprehensive level of data on individual customers is far beyond any other app, and a completely different level of detail compared to user profiles generated by Google and Facebook in other countries. WeChat encompasses the entirety of a users’ social life, spending habits, interests and behavior patterns, which sets up an unparalleled extent of marketing potential.

The cosmetics label SK-II has launched a similar experimental concept store in Hainan. The SK-II outlet cross-promotes with “VS Change Destiny”, an animated series developed by SK-II studios and integrates with WeChat. Store visitors can play an AR (Augmented Reality) game based on the animated series. The store also features an installation that recommends personalized product packages by scanning and analyzing customers’ faces using a special AI and facial recognition powered camera.

As a holiday destination, Hainan Island is well positioned to create “destination stores” on a much larger scale than the Burberry-Tencent collaboration or SK-II pop up. Such stores have the potential to be attractions in and of themselves as much as they are retail platforms, and this is the most effective adaptation physical stores need to maintain relevance and interest to younger demographics.

Social retail projects in Hainan are likely to move forward on a bigger scale, with a much bigger budget than anything seen anywhere else in the world. All major European outlets are now focusing on developing flagship Hainan projects. Social media in China will likely begin to promote luxury retail outlets alongside travel packages, encouraging high-end shoppers to opt for a concierge experience at a destination outlet when they make purchases.

As China takes center stage in the world economy and becomes the most important luxury products market in the world, Hainan is shaping up to be one of the world’s most important shopping destinations. France’s Lagardère Travel Retail has developed a five floor, 30,000 square foot shopping complex in Sanya, and this is only the beginning of the Hainan boom. We will continue to update you on the most exciting developments in China’s luxury market in forthcoming newsletters.