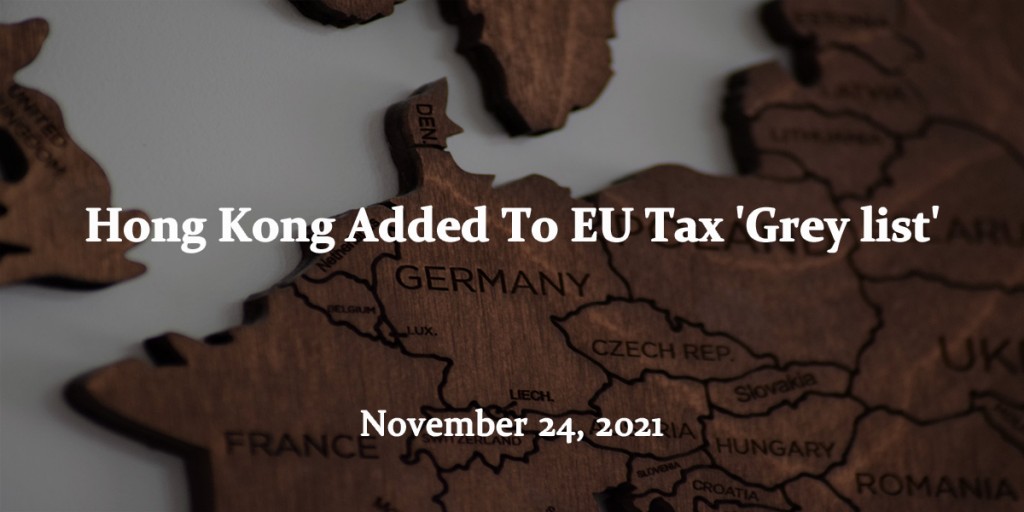 In October 2021, the Council of the European Union added Hong Kong, along with several other territories, to its ‘grey list’ (“Annex II of the EU list of non-cooperative jurisdictions for tax purposes”) The decision was made following a comprehensive assessment of region’s tax regime that potentially allows for tax avoidance on passive offshore income through the use of insubstantial entities domiciled in the jurisdiction.

One of the benefits of Hong Kong’s profits tax regime, which follows the territorial principle of taxation, is that it exempts foreign sourced income. Hong Kong has never been a tax haven, however, and the EU’s current concern regards the potential misuse of the region’s extensive double taxation avoidance (DTA) agreements. In some cases, there may be potential for “double non taxation” for certain types of income streams such as investments, bank interest, licensing and royalties.

Hong Kong’s tax legislation has consistently been updated over the years, in order to stay in line with the OECD’s Base Erosion and Profit Shifting guidelines. The EU’s decision to place Hong Kong on the grey list has attracted a lot of attention in the current news cycle due to the recent release of the Pandora Papers, which revealed a possible abuse of shell companies by various celebrities and former government.

However, Hong Kong has been placed on the EU’s grey list before. In 2017, the EU made the same decision, due to similar technical concerns. It was subsequently removed from the list in 2019, after the government updated the tax regime to enhance its overall transparency and ensure that its principles were consistently put into practice in all circumstances. Hong Kong has never been subject to any punitive tax measures in the past, and the current grey list placement does not affect any locally registered companies in Europe.

The grey list measure is intended to target companies that attempt to exploit the system in order to stream passive revenue through Hong Kong for the purpose of avoiding taxation altogether, rather than active international businesses or individuals managing their income and wealth through the city’s financial system. Hong Kong has always derived its competitive advantage from its transparency, robust legal system and financial services, with low taxation rates and exemptions intended to facilitate capital flows rather than provide a tax haven for insubstantial companies.

Currently, entities that lack economic substance and primarily report income derived Intellectual Property licensing, investments or bank interest, are technically exempt from profits tax if the revenue is sourced from a jurisdiction with a Double Taxation Avoidance agreement. However, if the company’s primary purpose is to avoid taxation on their holdings altogether, the arrangement may run counter to the government’s principles.

It should also be noted that the grey list is different from the black list, which consists of jurisdictions that are considered to pose a high risk of tax avoidance, and enable unfair competition and abuse. Companies domiciled in a blacklisted jurisdiction face severe restrictions in the EU, none of which are ever likely to apply to a business registered in Hong Kong. Any effect on Hong Kong’s international reputation for transparency is likely to be a temporary effect of the current news cycle.

The Hong Kong SAR government has indicated its ongoing commitment to decisive action against overseas tax evasion, with revisions to the tax regime anticipated within the next two years. Hong Kong maintains its standing by ensuring that the implementation of its tax regime unambiguously follows its principles, which are in line with OECD standards.

A government spokesperson stated that Hong Kong would “continue to adopt the territorial source principle of taxation” and “uphold our simple, certain and low-tax regime with a view to maintaining the competitiveness of Hong Kong’s business environment.” While the full details of the situation will only be made clear once the government issues further announcements, Hong Kong’s reputation, transparency and overall advantage will remain the same.

Any locally domiciled businesses and enterprises that may unintentionally come under scrutiny by reporting offshore passive income in Hong Kong should closely follow upcoming legislative announcements from the Inland Revenue Department in order to ensure that their level of local activity clearly satisfies economic substance requirements.

Furthermore, locally registered companies with operations and holdings in the European Union should ensure that their financial structuring meets transparency standards. The most comprehensive approach to ensure compliance would be to carry out a complete tax analysis for all non-commercial activity in Hong Kong or significant passive revenue streams.

We have helped companies ensure the continued integrity of their enterprise over the years. Our tax services team is adept and experienced with international taxation issues and we have assisted international enterprises with optimal business setup strategies that ensure both competitiveness and compliance.

Should you have any enquiries, we are always available for a free initial consultation at any of our offices in Asia and Europe.