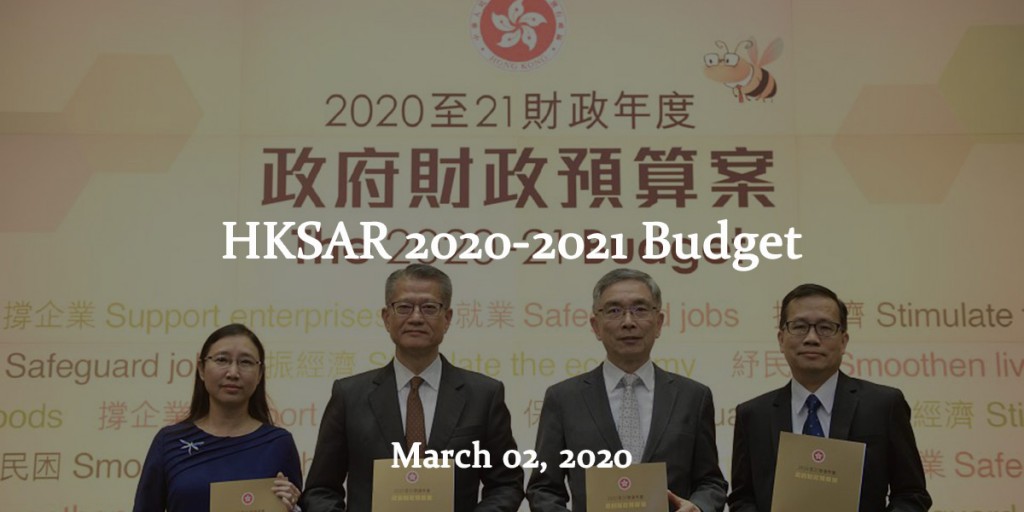 Hong Kong’s Financial Secretary, Paul Chan Mo-Po, announced the long-awaited details of the region’s 2020-2021 budget as specified in the Appropriation Bill 2020 on February 26, 2020. The Financial Secretary’s speech began with an acknowledgment of the unforeseeable developments that impacted the local economy in 2019, due to the US-China trade conflict as well as local social disturbances. The first quarter of 2020 saw these factors compounded by the COVID-19 outbreak in Mainland China that has created unprecedented worldwide economic pressures that affect Hong Kong’s economy, despite the relatively less severe extent to which the disease has spread locally.

The Hong Kong government had already set up a HK$30 billion Anti-Epidemic Fund to provide relief to individuals, enterprises and industries severely affected by the outbreak. In light of the pessimistic economic sentiment and difficulties faced by broad segments of the local population, the theme of the 2020-2021 budget is “supporting enterprises, safeguarding  jobs, stimulating the economy and relieving people’s burden”. The Financial Secretary made clear that the HKSAR government intends to mobilize its fiscal reserves towards social support initiatives, prioritizing the resuscitation of the economy and soothing public sentiment.

Some of the main highlights are as follows:

In addition to these concessionary measures, social security allowances will be increased by one month for all eligible Hong Kong residents. Local secondary school students will not be charged to sit for the Hong Kong Diploma of Secondary Education Examinations, recycling enterprises will receive a six month rental subsidy, and commercial electricity accounts will receive a 75 percent reduction (up to HK$5000) on their utility bills.

Economic growth was forecast between negative 1.5% to 0.5% for the year, after 2019’s 1.2% contraction. The government also anticipates a budget deficit over the next five fiscal years, predicting that Hong Kong’s HK$1.13 trillion reserves will fall to HK$ 937.1 billion by 2025. However, the possibility of a rapid recovery is left open, given the economy’s likely recovery once the public health emergency has resolved.

According to the Financial Secretary, the outbreak is likely to either significantly slow down or end altogether by summer 2020, which is when the government aims to deliver the HK$10,000-per-resident stimulus package. The projected deficit is mainly due to the mass payout and other economic assistance initiatives, which are not expected to trigger long term commitments.

Small businesses facing severe adversity due to COVID-19 related circumstances will be eligible to apply for low interest loans of HK$ 2 million, with a three-year repayment period through a HK$20 billion SME support initiative. Hong Kong Profits Tax for the year 2019-2020 will be capped at HK$20,000, easing the tax burden of 141,000 local taxpayers through a government support initiative worth HK$ 2 billion. An addition HK$6.4 billion contribution will go towards commercial property waivers and assistance for business utility expenses, including electricity, water and waste treatment bills.

The Financial Secretary further underscored the necessity of public support due to consumer price inflation during the third and fourth quarters of 2019, which saw increases in the prices of essential staple products. The inflation rate for 2019 was recorded at three percent, a 0.4% increase from the previous year.

The Financial Secretary stated that the economic impact from the COVID-19 crisis may exceed the extent of the 2003 SARS epidemic in the short term, while the labor force may face additional pressure. However, the local economy’s resilience as well as the region’s is expected to remain unaffected, with a full recovery anticipated once the crisis ends.

The Mainland China economy recorded 6.1% growth during 2019, although the constantly developing framework of US-China trade complicates projections over the short term, particularly in light of the significant unanticipated adversity created by the COVID-19 crisis. However, the PRC government’s extensive control over the country’s economic levers indicate that policy adjustments will ensure a high degree of economic stability and guarantee a growth rate greater than most other major economies once the crisis ends.

The Financial Secretary also announced that the global economy remains shaken due to the same circumstances that affect Hong Kong and Mainland China. However, with the prospect of a worldwide economic recovery forecast for the summer, when the COVID-19 outbreak is projected to significantly slow down or cease entirely, as well as the HKSAR government’s extensive stimulus measures, the economic outlook over the medium and long term continues to be optimistic.