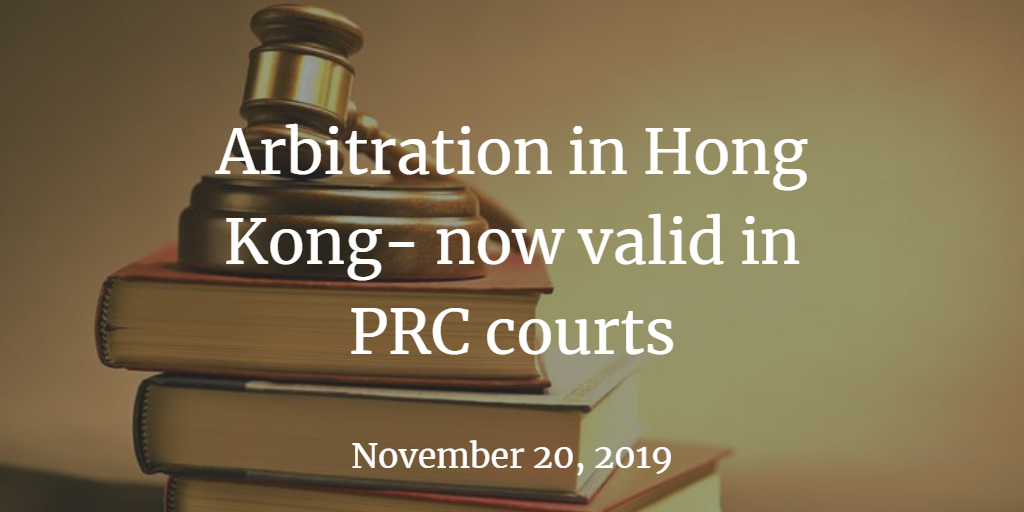 Why Hong Kong is now the world’s leading arbitration seat

On October 1, 2019, the Landmark Arrangement on Interim Relief Protection in China for Hong Kong Arbitrations between the Hong Kong SAR Government and the People’s Republic of China Supreme People’s Court took effect, allowing for arbitrations carried out by Hong Kong appointed entities to be enforced in Mainland China. Arbitration rulings in China are already enforceable (in terms of interim relief) in Hong Kong.

Arbitration proceedings that take place in Hong Kong under the following entities will be able to apply for interim measures to enforce rulings in the mainland.

This represents a major development for Hong Kong’s role as a legal jurisdiction for commerce in mainland China, because businesses can now enter into arbitration agreements in Hong Kong with confidence that they will be extended to PRC courts. Previously, parties were often faced with a binary choice between Hong Kong’s transparent court system and rulings enforceable in China. Arbitration institutions in Hong Kong are required to provide confirmation to PRC courts within 30 days of interim measure claims. Applications for interim measures can be made directly to courts in mainland China with subsequent confirmation from the Hong Kong institution. The arrangement will also apply retroactively to arbitrations made before October 1, 2019.

Arbitration agreements should clearly designate Hong Kong as the jurisdiction and specify the institution under which it will be carried out. This provides essential protection during the initial stages of collaborative projects in China. Hong Kong Arbitration under the arrangement is also expected to play a role in implementing efficient cross border legal services in the Greater Bay Area’s development.

With its depth of experienced professional talent handling arbitration related agreements and proceedings at globally competitive rates, Hong Kong is not only one of the best arbitration jurisdictions in Asia, but also a world leader. Rulings in Hong Kong are enforceable in over 150 jurisdictions worldwide, as of 2019 including mainland China and Russia.

Arbitration offers advantages over being reliant on the courts, particularly when the costs of filing a lawsuit outweigh the advantages in terms of recoverable finances or assets. Parties can agree on arbitrators with a fitting level of experience for the circumstances of their arrangements, making the process far more cost effective than hiring a specialized law firm. Arbitration is generally far more efficient than court cases which can take years, and judicial verdicts may be subject to appeal, creating uncertainty and adding to financial burden and time spent. Arbitration hearings and awards are usually confidential, and in most cases, rulings are not subject to appeal. Most notably for cross border commerce, as evidenced by the recently passed legislation, arbitration rulings are more easily applicable in foreign jurisdictions than court verdicts, which may potentially be subject to differences in national laws.

With unshakable foundations and adept, adaptable services, Hong Kong is expected to continue as a regional leader in financial services and investments and we are proud to draw on our longstanding financial, tax and company law expertise in our accounting, tax and corporate services. When entering into any new venture, it is vital to protect your interests in the most airtight, efficient way for yourself and your partners. We stay keenly aware of business conditions on the ground whether in Hong Kong, China, or Europe and we always strive to keep our clients ahead of the curve, wherever they choose to go.