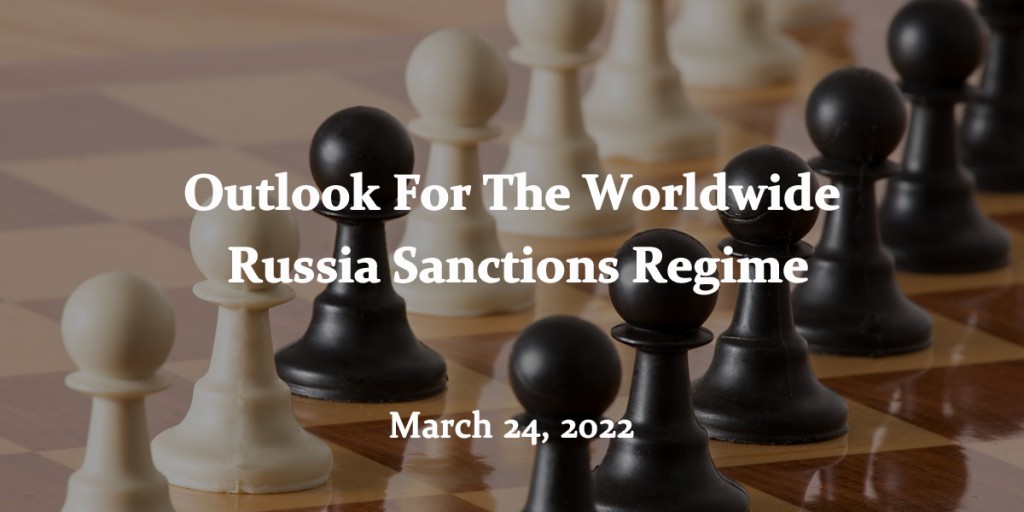 Over the past several weeks, a wide range of unprecedented sanctions against Russia, which are likely to impact businesses and financial services around the world, have been enacted by the governments of the United States, United Kingdom and the European Union.

The complexity, scale and ubiquity of the sanctions regimes ensure that they will impact not only Kremlin-associated state enterprises and the Russian private sector, but potentially the entire global economy.

Because the sanctions are issued in a coordinated multilateral initiative with advance planning, adjustments and communication between governments in North America, Europe and Asia, there is a certain degree of insulation against domestic economic fallout and adverse circumstances for third-parties (although this cannot be completely avoided in the short term).

For example, the US Treasury’s Office of Foreign Assets Control (OFAC) issues “General Licenses” which exempt transactions with sanctioned financial institutions, including those in Russia, under certain conditions. Despite the announcement of a US ban on Russian oil imports, OFAC’s General License 8A permits US allies to process transactions with Russian banks for purposes “related to energy”, which include “extraction, production, refinement, or purchase of petroleum, including crude oil, natural gas, or other products capable of producing energy”. The license is valid until June 2022. General license 12 permits banks to reject transactions involving sanctioned parties, instead of freezing accounts altogether.

The consistent, targeted application of sanctions, synchronized across multiple governments, provides a more flexible and practically sustainable model for international deterrence by preventing against unintended consequences, such as benefiting jurisdictions that provide fallbacks and means of circumvention, or creating a divergence of economic interests among allies. The United Kingdom’s announcement of its own restrictions on providing financial services to sanctioned companies, institutions and individuals was aligned with the US Treasury and US Bureau of Industry and Security, while Singapore’s sanctions ban its financial institutions and digital payment services industry from providing any services that enable fundraising by the Russian government.

The international sanctions regime is designed for open ended extension and tightening, and its effects in Russia are already being felt with the sharp drop in the value of the Ruble. Part of the reason for this is because the US authorities identify specific individuals and institutions instead of requiring companies and institutions to be responsible for the clients they deal with, thereby removing ambiguity, which simplifies and standardizes the process of compliance.

The US has also adjusted its export controls, requiring licensing to export foreign-produced merchandise manufactured with technology controlled by the US. Similar to its restrictions on Huawei’s production of electronics by preventing its use of any components containing hardware or software resources originating in the US, even if provided by a non-US company, the updated US foreign direct product licensing regime will both directly and indirectly impact a number of Russian industries and enterprises, restraining their supply chains and putting them at a competitive disadvantage in international markets. The effect extends beyond consumer products to Russia’s military and key national industries, making it one of the most consequential regulations issued by the US government. The Russian government may face difficulty modernizing its military hardware and technology infrastructure as a result.

Companies and financial institutions will have to plan their compliance strategies by assessing the broader supply chains and commercial networks their transactions and operations fall under. Considering the complexity of international finance, this is where unintended consequences that affect third parties may occur in the long run.

In order to prepare for any potential challenges ahead of time, it is advisable to study the sanctions regimes enacted by the US Department of Treasury, US Department of Commerce, and the European Council. The policies and procedures on exemptions and licensing are likely be updated multiple times a year, which makes it essential for companies to stay current with regulations. The sanctions are already starting to have an effect on offshore financial environments, with the UK’s economic crime bill, which puts pressure on the British Virgin Islands to require offshore companies to disclose the identity of beneficial owners of property, being rushed through Parliament in light of the Ukraine war. In the meanwhile, we will continue to keep you updated with relevant developments applicable to individual industries, markets and jurisdictions.