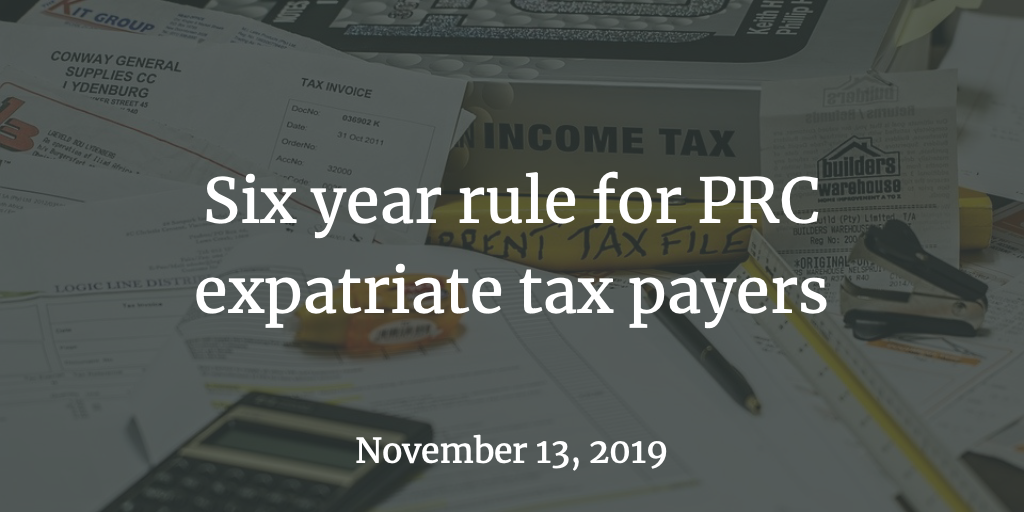 On March 14th, 2019, the State Administration of Taxation and Ministry of Finance issued two public notices regarding tax residency rules that retroactively took effect from January 1, 2019 onwards. These notices, entitled the “Determination of Duration of Residency for Individuals Without Domicile Inside the PRC” and “Determination of Source of Income, Taxable Income and Tax Liability for Individuals Without Domicile Inside the PRC”, serve to clearly illustrate the implementation of Individual Income Tax laws for nonresident individuals. The most notable effect is the new six year tax residency rule.

As previously announced in the IIT law and Implementation Details, non residents who are present in the country for more than 183 days in a tax year are considered tax residents under PRC law. The new rules now clarify that individuals who do not spend more than six consecutive tax years in the PRC will not be taxed on offshore income, as long as that income has not been generated through any PRC entity. Traveling overseas for more than 30 consecutive days resets the six year period, and time spent in the country is counted from the following tax year onwards. This essentially provides extra flexibility for individuals who need to spend extended periods of time in China but earn income overseas, since the necessity of 30 day travel arises every six years rather than every five.

If an individual residing in the PRC spends six years in the country without traveling overseas for over 30 days at least once, they would face tax liabilities on their worldwide income.

The six year period is counted from 2019 onwards. Time spent in 2018 or earlier will not be counted under the rule. This means that 2024 is the earliest that an individual would be considered an effective tax resident under the clarified rules, which also extend the definition of a single day to 24 hours.

Under the new rules, non residents are only considered to be present in the PRC for a day if they spend 24 consecutive hours. Previously, any part of a day spent in the country was counted towards tax residency, including days spent traveling.  Individuals that regularly travel from Hong Kong to the PRC for work will no longer have to worry about days of departure and arrival counting towards the 183 day threshold that triggers tax residency and Individual Income Tax liability.

Individuals who work in organizations that have branches in the PRC and overseas can now split their tax burden based on the number of days spent within the country in a given month if they hold positions in multiple branches. Previously, such individuals had to allocate income from their overall salary based on days spent in China, while the new rules assess PRC taxes only on income earned while present in China. This could potentially put such individuals in a lower tax bracket and lower their overall tax burden.

The calculations for determining the exact tax liability vary on a case by case basis. Bonus and stock income will be assessed separately from regular income and is not eligible for deductions. Such income can be split into six instalments per year, to be taxed at the marginal monthly rate.

Tax Residency at a glance

If you are a non-domiciled person earning income in the PRC, these new rules could considerably change your tax bill, particularly if you travel to China regularly. It is important to review the provenance of your income if you work in the PRC, and carefully track the number of days spent in the country. Please don’t hesitate to contact us with any enquiries regarding calculating your PRC income tax burden or reviewing your work and residence arrangements. Under the new rules, tax liability varies greatly depending on individual circumstances. Our experienced, bilingual tax team is well versed in local practices and we can help you plan for smooth sailing when working in China.