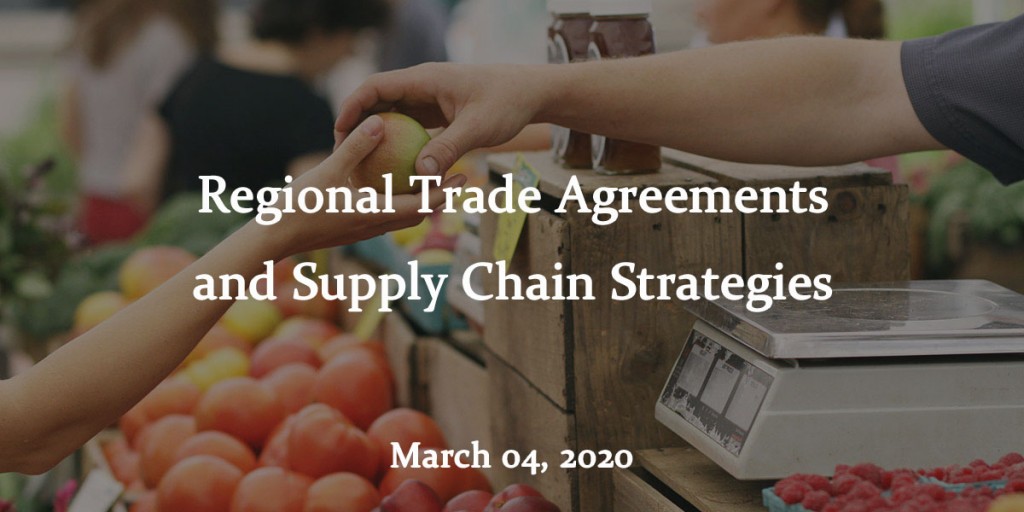 According to a World Bank Policy Research Working Paper (An Empirical Investigation of Trade Diversion and Global Value Chains: World Development Report 2020) Regional Trade Agreements (RTA’s) have a significant effect on trade, both within regions and between regions and the rest of the world. Regional Trade Agreements also contribute to the strength of Global Value Chains (the distribution of production across different countries).

Why do Regional Trade Agreements matter more in 2020 than ever before?

Regions with trade agreements are increasingly interlinking with other regions, while the current wave of rapid infrastructure development through programs like the Belt and Road Initiative will also accelerate trade within regions. According to the results of a study shared on the World Bank’s Trade Post website, improved infrastructure will increase trade between participating economies by 4.1 percent. Meanwhile, faster processing for time sensitive products and manufacturing operations will increase trade in sectors as diverse as food products, industrial metals, and plastic. While better infrastructure benefits processing efficiency, the efficiency of border controls, extent of trade agreements, removal of tariffs and opening of markets, when combined with infrastructure development, scales the creation of value by an order of magnitude. For example, border efficiency along with faster turnaround time has increased trade in Central and Western Asia by 16.6%, while countries in East Asia could increase exports by over 30%.

As more countries participate in Global Value Chains through RTA’s, trade data plays an increasingly important role in accelerating development and reaching benchmarks. The increasing adoption of Regional Trade Agreements can contribute to the complexity of business operations, making the use of data analytics vital for companies as well as countries. Enterprises will increasingly find it necessary to develop contingency measures for supply chain disruptions and study cost effective alternatives as they emerge.

The proportion of imported commodity content in exports increased by 63% worldwide in 16 years, reflecting the extent to which Global Value Chains re-route production on an international stage. Companies participating in Global Value Chains also benefit from knowledge sharing, which improves the quality of the end product and the efficiency of the manufacturing process.

RTA’s aim to strike a balance between Trade Creation, the increase in trade within a region that shifts resources from inefficient domestic suppliers to efficient regional suppliers, and Trade Diversion, decreased trade between the region and the rest of the world due to resources moving from efficient suppliers in other regions to inefficient regional suppliers. The effectiveness of the RTA depends on the balance between trade creation and trade diversion.

According to the World Bank’s Trade Diversion/Global Value Chain study, signing a Regional Trade Agreement usually results in decreased inflows of trade from the region and increased outflow. RTA’s reduce the benefit of trade barriers and Global Value Chains benefit industries through regional networks of input and output. Regional Trade Agreements can sometimes result in regionalism, a situation where the RTA increases the incentive for protectionist measures between the region and the rest of the world. Countries which are not well integrated into production chains see decreased imports from (and exports to) the rest of the world after entering into Regional Trade Agreements, while RTA’s in well integrated regions are associated with increased global marketshare. Increased export volume from regions with well-developed supply chains to the rest of the world could mean that countries which do not participate in RTA’s may be inclined to take protectionist measures. The Belt and Road Initiative is set to integrate countries within regions and connect regions around the world together.

How do supply chains adapt to changing trade winds?

When faced with protectionist policies, companies can employ various strategies to offset the increased costs. For example, some companies exporting from China to the US can make use of the “First Sale Rule” to migrate the payable duty by declaring the value based on the price listed by the manufacturer, rather than the price paid to brokers, agents or other middlemen. Other companies may decide to make a study of alternatives to China, which will involve comparing emerging production regions on the basis of RTA’s and GVC’s.

In addition to the option of moving production out of China entirely, companies could also study emerging manufacturing regions as they develop and gradually distribute operations between regions while seeking connectivity solutions to synchronize supply chains through data analysis and AI applications. Decentralized, integrated supply chains provide the flexibility to weather unpredictable geopolitical shifts while optimizing production, efficiency and competitiveness.

RTA’s help lower production costs overall, and increased trade between regions that sign trade agreements and the rest of the world is associated with stronger participation in regional value chains. On the other hand, the incentive for other regions to raise trade barriers increases along with trade volume. Regional Trade Agreements in regions that import less from the rest of the world are associated with lower incentives for protectionism.

Regional Trade Agreements and Global Value Chains also drive research on developing future policy guidance. According to the OECD, only 30% of international trade is comprised of single origin commodities. The OECD and WTO have started a joint initiative, the Trade in Value Added (TiVA) to take into account the value added at different stages of the supply chain. The OECD also has an Initiative on Global Value Chains to set up an international platform for policy discussion to guide trade policies that support development, production and integration.

The advent of restructured Base Erosion and Profit Shifting rules, emergence of new, competitive and integrated manufacturing regions in Southeast Asia and Latin America as well as the increase in the frequency of trade disputes mean that there may not be a return to prior models of business operations structuring.  With disruption as the new normal, studying the benefits of and drawbacks of individual trade regions with their comparative advantage will be key to developing the competitive supply chain of the next decade.

Our aim is to help bring the Asian and European markets together as a new era of dynamism brings prosperity to enterprises across the world. Our business advisory team can help you assess the advantages of setting up your company so you can come up with an informed strategy on cross border operations as well as regulation compliance that ensures the continued adaptability of your enterprise.