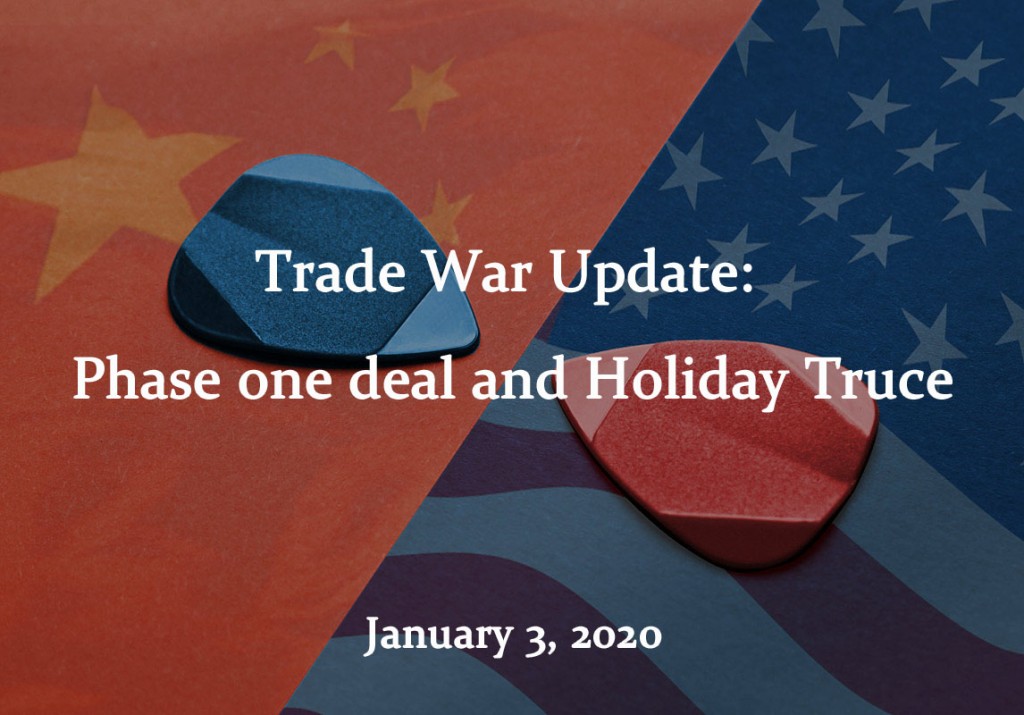 After over two years of negotiations, the governments of the United States of America and the People’s Republic of China have reached a “phase one trade deal”. Under the agreement, the US has canceled half of its planned tariffs on imports from China, while the PRC government has agreed to purchase more American agricultural commodities. Further details surrounding the initial agreement are yet to be announced. However, the trade deal indicates the beginning of a return to normalcy if negotiations continue successfully. Additional US tariffs on electronics imports from China scheduled for December 15th did not take effect, preventing economic difficulties for the consumer retail sector during the holiday shopping season and China is expected to purchase an additional USD 200 billion worth of goods and services from the US between 2020 and 2022.

The initial agreement is set to be signed in January. If the dispute continues to de-escalate, trade between the US and China could grow by USD100 billion or more in 2020. Subsequent trade agreements will focus on data sharing, intellectual property rights, trade secret protection and IT practices.

The United States government has accused Chinese government agencies of appropriating American intellectual property by forcing US companies to transfer their technology to PRC competitors as a precondition for entering the China market. China’s enactment of the Foreign Investment Law is set to address such concerns through legislation, while overseas observers broadly anticipate practical implementation strategies to protect patents through a payment enforcement mechanism, allowing American companies to collect punitive damages from any unauthorized use of their trademarks or patents while systematically deterring such infringements with stringent penalties. The prevailing consensus is that attitudes across the board have changed, making intellectual property protections a priority in China.

Shifts in longstanding institutional priorities are also set to curb the practice of forced technology transfers, allowing enterprises from the US to compete in the PRC market without interference.

While disputes over trade deficits can be addressed by adjusting commodity purchases and sales to balance import and export levels, the next phase of the trade agreement concerns emerging technology areas where the US and China are set to compete in terms of innovation and leading world standards. While the PRC seeks access to US research and development, the American government wants to overhaul the security of its companies’ trade secrets and innovations in critical technologies in order to maintain a competitive edge.

Striking a balance between collaboration and competition is likely to prove complicated as both sides seek to outline the boundaries of the playing field even as they compete. As new communications technology standards develop, it will be important to establish a working consensus on cross border data transfer security. Some initial steps toward developing a system of data transfer regulation and compliance for enterprises have been taken with the August 2019 draft legislation on security assessments for cross border transfers of personal information and important data.

Artificial Intelligence has been identified as an area of technology that will determine competitive advantage in productivity to the same extent that the Industrial Revolution did in the early 20th century. Bridging the cultural gap between economic systems where State Owned Enterprises leverage government investments and the private sector driven ecosystem in the US will continue to be the critical issue in overcoming trade differences. China’s 2017 cybersecurity law requires all businesses in China to store data on servers within the country. Considering the sensitivity of data in critical technology fields, it is likely that negotiating further deals will prove technically and diplomatically challenging.

Meanwhile, concerns remain about the means of reaching the terms of the initial trade deal. According to the South China Morning Post, if China doubles its purchases of goods and services from the US, it can only do so by diverting existing trade from other partners.

The agreed figure would require China to substitute its imports of automotive parts and semiconductors from China and Japan with American alternatives, because agricultural commodities cannot cover the entirety of the agreed amount. The benefits of pacifying American grievances by creating new trade deficits with other countries could be unsustainable in the long run.

Although many details of both “phase one” and “phase two” of the trade deal remain to be seen, the cancellation of tariffs and announcements on both sides indicates that the trade war has reached a truce for the 2019-2020 holiday season. Many enterprises in Hong Kong have avoided the impact of further tariffs, and business proceeds with less difficulty than some may have expected. Comments from government representatives indicate that further slow and steady progress is to come over the next two years. If the two countries enact a Bilateral Trade Agreement, it would be to the benefit of businesses and enterprises worldwide.

We will continue to keep you updated on developments as they unfold.