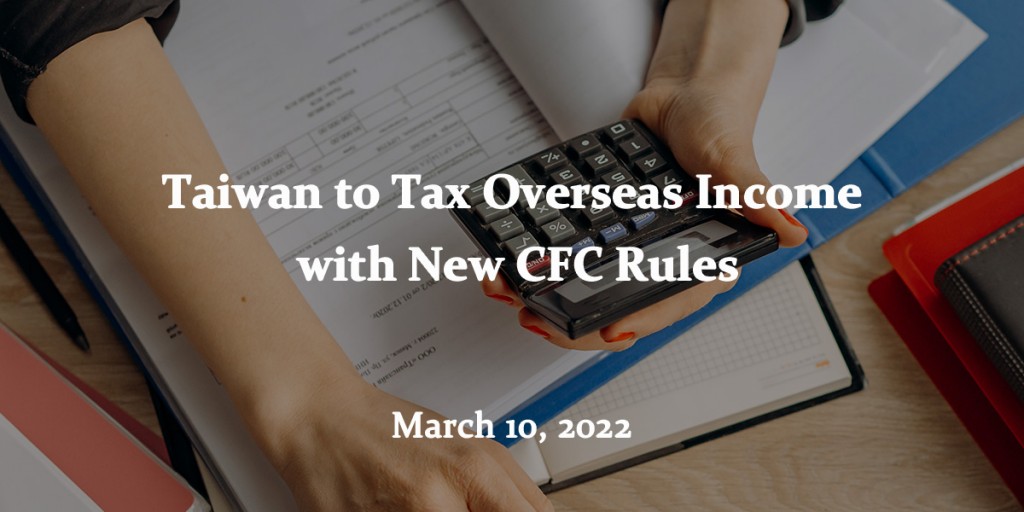 On January 14th, 2022, Taiwan’s Ministry of Finance announced that its new tax rules for controlled foreign companies (CFCs) will take effect from next year onwards. Taiwan’s CFC rules were originally introduced in June 2016, under Articles 43-3 and 43-4 of the Income Tax Act, and Article 12-1 of the Income Basic Tax Act, which was introduced in 2017. The executive branch of Taiwan’s government, the Executive Yuan, also plans to raise the minimum applicable corporate tax rate from 12% to 15%, bringing Taiwan’s tax regime in line with OECD’s standard for a global minimum tax rate for multinational enterprises.

In July 2019, Taiwan’s legislature, the Legislative Yuan, passed a resolution requiring the government to decide on a timeframe for CFC rules to take effect within one year after the expiry of the Management, Utilization and Taxation of Repatriated Offshore Funds Act, which provided tax amnesty on repatriated funds until August, 2021.

Under the new rules, which will take effect from Jan 1, 2023, any Taiwan company with a controlling interest in an overseas business registered in a low tax jurisdiction, either through proprietorship or indirect holding, will be subject to income tax obligations on their foreign-sourced profit. Taiwan-based companies will be required to report CFC profits as investment income, even when these earnings are not distributed to the parent company.

Income generated by foreign companies registered in a country with a corporate tax rate under 14% (such as the British Virgin Islands or Cayman Islands) which are controlled by a tax resident of Taiwan (or parties affiliated with the taxpayer) will be subject to the CFC rules if they hold or control more than 50% of the offshore company.

Tax residence in Taiwan is defined according to household registration and the period of time residing in the jurisdiction. Individuals with a household registration who spend 31 days or more in Taiwan during a given year will be considered tax residents under the law. Those without a household residents will be considered tax residents in Taiwan if they spend 183 days in Taiwan. The authorities will also consider factors such as insurance policies, pension, business operations, assets, family residence (spouse and children) and other social and economic interests that indicate strong association with Taiwan when determining tax residence for individuals.

The term ‘related parties’ refers to any affiliated enterprises or individuals. Affiliation can be defined as holding 20% of voting shares or equity in an enterprise, holding a controlling interest (highest proportion of shares), appointing half or more of the company’s directors, or being related to the chairman or chief executive of the company. The authorities will also evaluate any other circumstances that enable an individual to control or influence the finances, recruitment, operations and major decisions of an overseas company.

The legislation also refers to “related parties other than the affiliated enterprises.” Under the CFC rules, the spouse and relatives up to the second degree of kinship and family members whose names appear on the same tax returns will be considered related parties.

Beneficiaries of a trusts or foundations that receive distributions or donations of one third or more of its total funds from an individual tax resident and management personnel (directors, vice presidents, heads of department) who are under the individual’s supervision (as well as their spouses and relatives) are all considered “related parties”.

Essentially, any individual with influence over the decisions of a company or organization may be considered a “related party”, as would their spouse and relatives. As such, it is important to evaluate whether any family relationships, business partnerships or philanthropic initiatives would trigger income tax obligations under Taiwan’s CFC rules.

If you are resident of Taiwan and receive income from an overseas enterprise in a low tax jurisdiction, you should calculate that company’s income for the current year and declare it under your overseas income according to the percentage of shares you hold. In other words, multiply the CFC profits by the percentage of ownership to estimate your taxable overseas income.

You may be exempt from filing income taxes on your overseas company’s profits in Taiwan if you satisfy any of the following conditions:

If you own an offshore company in a low tax jurisdiction and hold 50% of its shares, either directly or indirectly, and the company earns more than NT$7 million without conventional standards of economic substance, you will most likely be required to file the income you receive.

The required documents include:

We will continue to monitor the implementation of the CFC rules in the run up to January, 2023. In the meanwhile, we strongly recommend that our Taiwan based clients review all their assets and prepare their taxes for next year well ahead of time. In some cases, it may not be difficult to qualify for exemptions.

We remain committed to our clients across Asia and Europe, and we will continue to update you on all relevant tax issues and business opportunities.